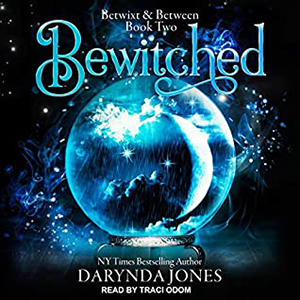 Forty-something Defiance Dayne only recently discovered she comes from a long line of powerful witches. Added to that was the teensy, infinitesimal fact that she is what’s called a charmling. One of three on the entire planet. And there are other witches who will stop at nothing to steal her immense power, which would basically involve her unfortunate and untimely death.

No one told her life after forty would mean having to learn new lifeskills—such as how to dodge supernatural assassins while casting from a moving vehicle—or that the sexiest man alive would be living in her basement.

Whoever said life begins at forty was clearly a master of the underappreciated and oft maligned understatement.

We pick up six months after Betwixt and Defiance has decided she is going to hide her powers. She is going to use the results of book one as an excuse to make everyone believe she has lost her magic. However, the more she tries to hide it, the more it is needed. She also has a sexy werewolf who doesn’t believe her and a BFF who is disappointed they can’t get their paranormal business off the ground.

I have really come to love all the characters in this series. Even Percy, who qualifies as a character, right? Bewitched contains the sarcastic spunk and humor I’ve come to love from Darynda Jones’ writing. Defiance is a 40-something character, and I think maybe this is considered Women’s Fiction instead of just urban fantasy, but whatever box you want to stuff it in, it is a lot of fun. The relationships between the characters continues to grow as we get to know them and they get to know each other. The more time Defiance spends with those around her, the more she questions her decision to leave.

Bewitched is a wonderful installment in the Betwixt and Between series. This group of characters and their antics are continuing to grow on me as I read more into the series. The first book had me drawing lines between the characters here and the ones in the Charley Davidson series, but they are starting to stand on their own now.