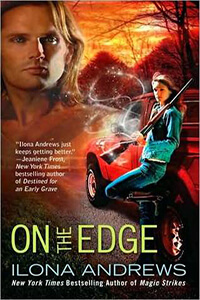 Rose Drayton lives on the Edge, between the world of the Broken (where people drive cars, shop at Wal-Mart, and magic is a fairy tale) and the Weird (where blueblood aristocrats rule, changelings roam, and the strength of your magic can change your destiny). Only Edgers like Rose can easily travel from one world to the next, but they never truly belong in either.

Rose thought if she practiced her magic, she could build a better life for herself. But things didn’t turn out how she planned, and now she works a minimum wage, off the books job in the Broken just to survive. Then Declan Camarine, a blueblood noble straight out of the deepest part of the Weird, comes into her life, determined to have her (and her power).

But when a terrible danger invades the Edge from the Weird, a flood of creatures hungry for magic, Declan and Rose must work together to destroy them—or they’ll devour the Edge and everyone in it.

On The Edge by Ilona Andrews is the first book in The Edge series. I was on a binge to inhale everything Ilona Andrews. On the Edge features Rose and Declan to start out the series.

Rose is an Edger who can travel easily between the Broken and the Weird. Two separate worlds. The Weird is a magic filled place while the Broken is the world of normal humans. Rose is working a low paying, thankless job in the Broken avoiding The Weird to hide her magic and also help raise her brothers. Rose is a strong and determined character that will do anything to protect her family.

Then along comes Declan from the Weird. Rose is convinced he is only there to take her as his wife and to get her magic. That may have been Declan’s initial intention, but he soon finds himself enamored with Rose and will do what he can to win her, just for being her.

I enjoyed the story of Rose and Declan and getting to know their world. There are many ups and downs along with some dangerous times that kept the excitement high. I think I suffered a bit of book one syndrome with On The Edge, but I also did with the Kate Daniels series and I ended up being a huge fan of that series. I will definitely continue on with this one!

I love Renee Raudman as narrator and I didn’t confuse her voices with that of the Kate Daniels series at all. She did an amazing job with taking on the accents of the characters living in the back woods of the Edge.