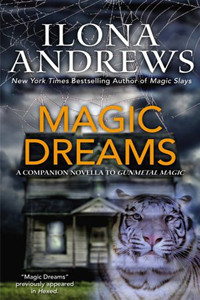 Alpha Pack leader Jim Shrapshire has always been the strong, silent type. But something has come over him--a magic force currently residing in one of the Pack's headquarters. Were-tigress Dali Harimau has always wished she could get Jim's attention--but now he needs her help.

Stricken with a magic-sickness, Jim needs Dali's flair for magic. And to save him, she must challenge a powerful, dark being to a battle of wits.

Here we have another quick novella, this time featuring the hard as nails Jim Shrapshire and the meek, quiet Dali Harimau. We met Dali briefly in Magic Strikes where she helps the gang with her magic in the Games. What is new is that there is a little something between Dali and Jim.

Dali is one awesome character! She’s hilarious and one determined weretiger. Just don’t put me on the street with her. I think this wild and crazy side of Dali along with her type of magic, keep her from being taken as seriously as she should be. Dali proves that she should not be taken lightly as she takes on a task that only she can pull off.

Poor Jim. We see a side to him I bet he wants no one else to see. Is there a few feelings popping out of Mr. Calm, Cool & Deadly? It was fun getting a little glimpse and seeing more to his character than what we see in the full length books.

Magic Dreams was a fun, quick read helping you get to know a couple of characters you wouldn’t have thought much about before. You may even think of these characters a bit differently in upcoming books. I know a lot of people skip novellas, but I really think, if you’re a fan of the Kate Daniels series, you will enjoy this.