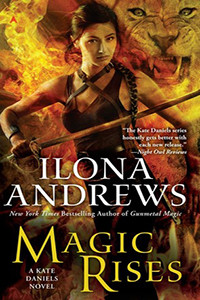 Mercenary Kate Daniels and her mate, Curran, the Beast Lord, are struggling to solve a heartbreaking crisis. Unable to control their beasts, many of the Pack’s shapeshifting children fail to survive to adulthood. While there is a medicine that can help, the secret to its making is closely guarded by the European packs, and there’s little available in Atlanta.

Kate can’t bear to watch innocents suffer, but the solution she and Curran have found threatens to be even more painful. The European shapeshifters who once outmaneuvered the Beast Lord have asked him to arbitrate a dispute—and they’ll pay him in medicine. With the young people’s survival and the Pack’s future at stake, Kate and Curran know they must accept the offer—but they have little doubt that they’re heading straight into a trap…

The Pack always faces the fear of losing their children during adolescence. Kate witnesses it first hand and is plagued by the guilt of what she did and how she can’t do it to protect all the other young. The shifters are all called to the Mediterranean to act as mediators to two opposing clans waiting to see whose baby is the first to be born by Desandra. The first child born will bring that baby’s father’s clan rights to a vital piece of land. The Atlanta pack knows this is a trap, but the reward is just too great to not go. This is just the opportunity they need to save the children of the pack!

The schemes that played out in Magic Rises had me on an emotional roller coaster! Things I had started to take for granted were tested, some relationships were strengthened and surprises just popped up everywhere!

Hugh D’Ambray places a big part in this book, and his intentions will surprise the hell out of you!

I just couldn’t get enough of this book. I was glued. My emotions were on a roller coaster from hell and I powered through the pages praying that things were going to be ok. That my life would not be shattered by this book! Things don’t end perfectly, and there are tears, so be prepared! I have to say, I think Magic Rises is at the top of my favorites for this series. But like I’ve said before, this series just keeps getting better and better!

There is not much more I can say about the narration that I haven’t already said. Renee Raudman does an absolutely amazing job! Kate Daniels and Renee Raudman are a perfect match!