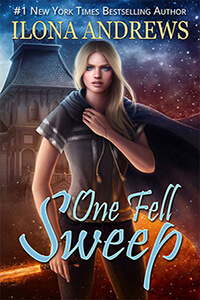 Dina DeMille may run the nicest Bed and Breakfast in Red Deer, Texas, but she caters to a very particular kind of guest...the kind that no one on Earth is supposed to know about. Guests like a former intergalactic tyrant with an impressive bounty on her head, the Lord Marshal of a powerful vampire clan, and a displaced-and-superhot werewolf; so don't stand too close, or you may be collateral damage.

But what passes for Dina's normal life is about to be thrown into chaos. First, she must rescue her long-distant older sister, Maud, who's been exiled with her family to a planet that functions as the most lawless penal colony since Botany Bay. Then she agrees to help a guest whose last chance at saving his civilization could bring death and disaster to all Dina holds dear. Now Gertrude Hunt is under siege by a clan of assassins. To keep her guests safe and to find her missing parents,

Dina will risk everything, even if she has to pay the ultimate price. Though Sean may have something to say about that!

One Fell Sweep finally gives us more of Dina. I always thought it was sad that she was left pretty much alone, away from any family. Now, when it looks like Dina may have some pretty big issues to overcome, her family and friends all pull together for her. I really enjoyed Maud and Helen. They’ve been through a lot. Even though they think they are getting away from violence and destruction, they find themselves in the middle of it at Gertrude Hunt.

It was really nice to see the progression of Dina and Sean’s relationship, as well as something that could be brewing between Maud and Lord Arland. Relationship time is short though in this action packed installment of the Innkeeper Chronicles. Gertrude Hunt and it’s occupants are under seige and Dina is determined not to let her guests down. An interesting character shows up that seems to be possessed by something and I thought that area was going to lead us down a road of more stories from Dina and Gertrude Hunt.

As always, Ilona Andrews creates a fascinating world with tons of twists, turns, relationships and action. One Fell Sweep was a definitely a book that kept me on the edge of my seat wondering what was going to happen next.

The narration by Renee Raudman was spot on as usual and so pleasant to listen to. She really makes Dina sound so logical. I think that’s the only way I can explain it. Her tone just really fits these characters.