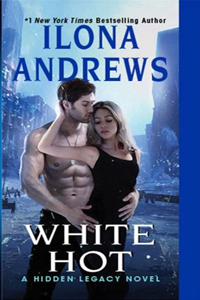 Nevada Baylor has a unique and secret skill—she knows when people are lying—and she's used that magic (along with plain, hard work) to keep her colorful and close-knit family's detective agency afloat. But her new case pits her against the shadowy forces that almost destroyed the city of Houston once before, bringing Nevada back into contact with Connor "Mad" Rogan.

Rogan is a billionaire Prime—the highest rank of magic user—and as unreadable as ever, despite Nevada’s “talent.” But there’s no hiding the sparks between them. Now that the stakes are even higher, both professionally and personally, and their foes are unimaginably powerful, Rogan and Nevada will find that nothing burns like ice …

It was a hell of a long wait between Burn For Me and White Hot. I debated going back and reading Burn For Me again before jumping in to White Hot, but I was impatient. This book was getting awesome reviews and I was dying to start.

Nevada is so independent but yet has a great cast of family surrounding her when she needs it. Some say having so much family around leaves you open to attack, but the Baylor family is not your typical family. They work as a team and I love each and every one of them. They all are such characters. I’m a big Grandma fan. So far from your typical grandmother.

Rogan is not a great subject for Nevada to begin the story. But as it happens, she ends up working with him again and things slowly build for them. They are investigating the death of a man’s wife and it takes the whole team to dissect all the evidence.

I am SO glad I waited until Wildfire was out before I started this because I started it as soon as the audio for White Hot ended. I couldn’t get enough. Rogan and Nevada together work so well, and their budding romance was just icing on the cake! The mystery being solved, and then new things popping up, like a new relative in town kept me so deep in the story I didn’t want to come out. I love the way the Andrews weave their stories, giving you just enough action, deep characters and mixing just enough romance to keep everyone happy. They definitely have found the secret formula! I’m trying to keep my fangirling to a minimum, and there was so much great stuff in this book to talk about, I’m just going to keep my review short and tell you I loved it!

You cannot end an audio review of a book narrated by Renee Raudman without making note of how she really nails the characters and story. What could be more of a treat than an amazing book read by Renee Raudman!