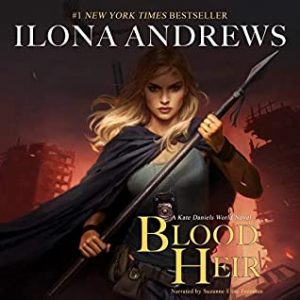 Atlanta was always a dangerous city. Now, as waves of magic and technology compete for supremacy, it’s a place caught in a slow apocalypse, where monsters spawn among the crumbling skyscrapers and supernatural factions struggle for power and survival.

Eight years ago, Julie Lennart left Atlanta to find out who she was. Now she’s back with a new face, a new magic, and a new name—Aurelia Ryder—drawn by the urgent need to protect the family she left behind. An ancient power is stalking her adopted mother, Kate Daniels, an enemy unlike any other, and a string of horrifying murders is its opening gambit.

If Aurelia’s true identity is discovered, those closest to her will die. So her plan is simple: get in, solve the murders, prevent the prophecy from being fulfilled, and get out without being recognized. She expected danger, but she never anticipated that the only man she'd ever loved could threaten everything.

One small misstep could lead to disaster. But for Aurelia, facing disaster is easy; it’s relationships that are hard.

I don’t really know how to explain Aurelia Ryder without giving too much of the Kate Daniels series away, but she is Kate & Curran’s daughter Julie. She has moved away and has spent the last few years training for everything an Oracle has been telling her. Following this Oracle’s advice, Aurelia has to stay away from Kate to prevent terrible things happening to her family.

The roles of a few of the characters, mainly those that Aurelia call her grandparents surprised me. They were just not the way I envisioned them from before. There are a few people she does contact, or contact her from her past so we do get to enjoy scenes with people we have missed. Magic has totally changed Aurelia, even her looks, so she is able to navigate Atlanta fairly quietly to achieve her goals.

I got a flashback when Aurelia takes a homeless girl under her wing to protect. It took me back to how Julie came into Kate’s life. Derek’s appearance however brought the romantic tension I was looking for. It was nice and subtle, the way Kate and Curran started out. I was pretty content that there was at least a thread of romance going on.

Blood Heir was definitely a great start to the Aurelia Ryder series. Normally that is hard for me to say for a first book, but since there was so much familiar it didn’t have that first book syndrome for me. It is exciting to see the differences that have developed between Aurelia and Julie. This book left me wanting more. Of course, everything Ilona Andrews writes leaves me feeling this way!