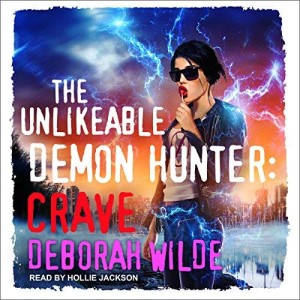 seriously messes with your love life.

Nava is happily settling into her new relationship and life is all giddy joy and stolen kisses.

Except when it’s assassins. Talk about a mood killer.

She and Rohan are tracking the unlikely partnership between the Brotherhood and a witch who can bind demons, but every new piece of the puzzle is leaving them with more questions than answers.

And someone doesn’t appreciate them getting close to the truth.

On top of that, a demon known only as Candyman has unleashed a drug that’s harming users in extremely disturbing ways.

Nava vows to take this demon down. But will life as she knows it survive this mission, or will this be the one time she should have looked before she leapt?

Happily-ever-after? Barring death, she’s got a real shot at it.

I was quite glad that most of the book did not focus on relationship drama in this edition of the Unlikeable Demon Hunter. We were able to focus mainly on the demon case to be worked as well as the outstanding case of who is binding demons.

Nava and Rohan continue to look into the demon binding, trying to sort out if it is the witches or the Brotherhood that is doing it. Nava braves contact with demons that could be the very death of her to try and get information. She plays things really risky and not always to Rohan’s liking. We learn some interesting things about Nava. However, once again, Nava drops down the rabbit hole with her decisions and leaves me shaking my head. I have to remember that she is young and she is doing what she thinks is the best for her or the people she loves. She just obviously does not think her actions through which can be very frustrating. When it seems we are supposed to feel bad for Nava, I just couldn’t bring myself to, as she just brought it all on herself knowing that she is doing stuff she shouldn’t.

I thought the Candyman story line was pretty interesting. It was really original. I was also really surprised by the bombshell about Nava. Those moments really kept me involved in the story. It wasn’t until Nava really goes into tstl mode that I got frustrated. Luckily it was the end of the book. The ending left me wanting to shake Nava and tell her it’s all her own fault. I just don’t feel bad for her.

I will continue to listen as I really want to see what happens with the witches and the Brotherhood. The next installment is probably going to be full of relationship drama, but hopefully we’ll get enough of the demon hunting cases that it will be worth the listen. It is sad that I don’t really like the main character much, but the side characters make it worth it. I do enjoy them. I’m also really interested in the new abilities that Nava has. I’m hoping that she’ll use them wisely.