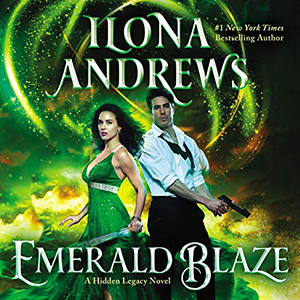 As Prime magic users, Catalina Baylor and her sisters have extraordinary powers—powers their ruthless grandmother would love to control. Catalina can earn her family some protection working as deputy to the Warden of Texas, overseeing breaches of magic law in the state, but that has risks as well. When House Baylor is under attack and monsters haunt her every step, Catalina is forced to rely on handsome, dangerous Alessandro Sagredo, the Prime who crushed her heart.

The nightmare that Alessandro has fought since childhood has come roaring back to life, but now Catalina is under threat. Not even his lifelong quest for revenge will stop him from keeping her safe, even if every battle could be his last. Because Catalina won't rest until she stops the use of the illicit, power-granting serum that's tearing their world apart.

Yes! Allessandro is back! I hated that he left Catalina in the last book. Now though, he seems to realize that she is a priority for him. Or is it just coincidence that the revenge Allessandro has been fighting for for so long had crossed paths with Catalina.

So yes, I totally loved all the scenes with Allessandro trying to win Catalina back. The romance lover in me has to point that out. I did a lot of swooning. Besides the swooning however, we also have some great action going on. House Baylor is out to fight some serious monsters that seem completely unstoppable. There were times when I wondered if Catalina and Allessandro were going to be able to stop the craziness that had overtaken part of the city. I love it when I get knots in my stomach, anxious as to what is going to happen to my favorite characters. With the Andrews team, I don’t take anything for granted.

This writing duo has drawn me in to multiple series and I love everything I’ve read from them. Emerald Blaze is no different. I was on a roller coaster of emotions all throughout this book and I loved every minute of it. Catalina and Allessandro make an amazing couple and we even get some great page time with Nevada. I can’t say enough about how happy I was with Emerald Blaze! I just want to gush over it! I won’t do that to you though, just know I loved this book, this series and this author(s)!