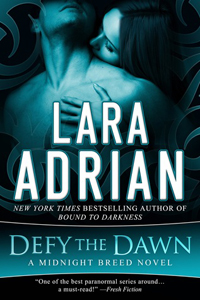 Daywalker Brynne Kirkland survived a hellish upbringing as a product of a madman's lab. Tough, driven, and devoted to her work in law enforcement, Brynne has never dared to risk opening her heart to anyone--least of all a handsome immortal from a world on the verge of war against hers.

Atlantean warrior Zael left the intrigue of his realm several lifetimes ago, along with the battles he fought as one of the queen's legion. As a free-spirited loner walking the fringe of two worlds--that of his secretive and powerful people, and the outside world belonging to mankind and the Breed--it was never his intention to return to combat and bloodshed. Nor had he imagined that he might ever be tempted into anything stronger than desire . . . until he meets Brynne.

Thrust together as allies of the Order in the fight against a diabolical enemy, Zael and Brynne embark on a mission that will ultimately force them to decide between duty to their people, and a passion that defies all bounds.

Defy the Dawn by Lara Adrian has been on my TBR for awhile and I’ve been dying to get back to this series I’ve fallen behind on. I was really interested in a relationship with an Atlantean. I wanted to know more about their world. It was also interesting to learn more about the daywalking Breed females.

Brynne had some terrible effects from the DNA combination she received from Dragos. She wasn’t like Tavia and she didn’t want anyone to know. Zael, the Atlantean warrior has had Brynne’s interest since she first saw him, but she is too afraid to follow through on her attraction because of her secrets. When Zael discovers Brynne’s secret and he ends up using his power, Selene, the queen of the Atlanteans zeroes in on his location and threatens the Order. It is then up to Zael and Brynne to help setup an alliance with the Atlantean colony that defected from Selene.

Defy the Dawn focused mainly on the couple’s relationship with the business of attaining the alliance kind of a secondary thing. Brynne’s reluctance to saddle Zael with a life with a monster was understandable but sad. I wanted to see her happy and to come to terms with what she is. It was good to see Zael work at convincing Brynne that she was still desirable even with her monster side.

I liked Zael. He had a sad story with Dylan’s mother that was haunting him. Brynne helped him with that. Zael just seemed so caring and genuine. He was loyal to his people but willing to build a relationship with the Order. The colony was an interesting place. The action that takes place there was brief but game changing. It seems like nowhere is safe from betrayal and terrorism.

Defy the Dawn does bring on new attacks by Opus Nostrum that the Order is left dealing with. This will likely continue through the next book and I’m really scared for what this chaos they are bringing is going to mean for the lifestyle of the Breed.

I am happy to be back in the world of the Breed. This book me back to the adult feel of the series. The previous books that focused on the children of the original Breed males had me feeling more in the New Adult realm. I still enjoyed them, but it felt kind of weird reading about the romances of characters I still saw as children.

Defy the Dawn was an enjoyable read and I’m really glad I am catching up on this series. I have missed it. 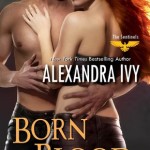