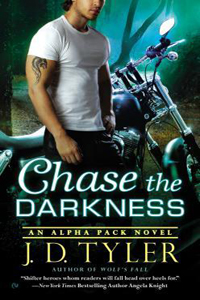 Believed dead by his Pack mates, Micah Chase, a wolf shifter and Dreamwalker, was held captive for months, subject to tortures that left him physically scarred and emotionally unsettled.

Now under the care of the Alpha Pack’s doctors, he’s been prescribed an experimental healing drug, but he still can’t shake the nightmares. Even more damning is that Micah’s problems pose a danger to his team, and if he doesn’t get himself under control, they’ll all suffer a terrible fate.

There is a key to his salvation. Jacee is a beautiful coyote shifter, and though her kind is hated, she’s falling in love with a man whose very future is in her hands. Together they’ll face his personal demons as well as a deadly enemy—and for both of them desire has never come with such risk.

Chase The Darkness is my jump into the Alpha Pack world. All the way into the 7th book and I understand why this series has gotten so far in.

Micah is a character that holds many demons after his earlier imprisonment. All of his vices are separating him slowly from his pack. It is really sad as the relationship between a shifter and his pack is almost as important as breathing.

Jacee comes along and is not the most popular person in town, or with the pack. Micah is not aware of Jacee’s situation which causes that natural alpha instinct to come roaring out. Another possible crack in the Pack dynamics.

Micah’s issues are real and hard hitting. It’s an issue many deal with and I like the way Tyler puts it out there. I was really cheering for him. Jacee’s situation I felt was minor and was resolved pretty quick. We had some tension surrounding her, but I don’t think it was anything compared to all of the battles Micah is fighting.

The relationship between Micah and the pack is strong despite Micah’s best efforts to alienate himself. Falling for Jacee could have been another sticking point. I think that would have caused so much guilt for Jacee. It would be tough to give up your love so a man could have his pack or tell them all to go to hell and keep him wrapped up for herself.

As well as all the intricate relationship drama, there is a great line of action. There are deaths that are pointing to the wolves and they have to stop the perp. It is a big surprise where this leads. It was exciting and scary. I truly enjoyed it.

Chase The Darkness pulled me into this world and has me really anxious to pick up the first six books. The relationships we see in this book sound like they had amazing stories and I’m ding to read them. This is definitely a recommended read! 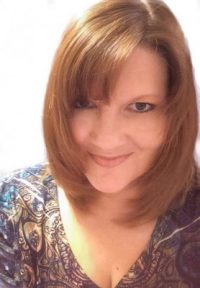 USA Today Bestselling Author J.D. Tyler is best known for her dark, sexy paranormal series Alpha Pack, and the Firefighters of Station Five and Sugarland Blue series as National Bestselling Author Jo Davis. PRIMAL LAW, the first book in her Alpha Pack series, is the winner of the National Readers’ Choice Award in Paranormal. She’s also been a multiple finalist in the National Readers’ Choice Awards, the Colorado Romance Writers Award of Excellence, a finalist for the Bookseller’s Best Award, has captured the HOLT Medallion Award of Merit, has been two-time nominee for the Australian Romance Readers Award in romantic suspense, and had one book optioned as a major motion picture.

When she isn’t writing, J.D.’s idea of a good time certainly isn’t cleaning house (sniff), bungee jumping (not in this lifetime, or the next), or camping (her idea of “roughing it” is a slow bellboy). She enjoys reading, being pampered like the diva she is, and spending time with her awesome family. J.D. lives in Texas with her two grown kids, two cats, and a Boston terrier, all of them horribly spoiled.