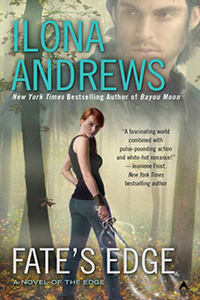 Audrey Callahan left behind her life in the Edge, and she's determined to stay on the straight and narrow. But when her brother gets into hot water, the former thief takes on one last heist and finds herself matching wits with a jack of all trades...

Kaldar Mar-a gambler, lawyer, thief, and spy-expects his latest assignment tracking down a stolen item to be a piece of cake, until Audrey shows up. But when the item falls into the hands of a lethal criminal, Kaldar realizes that in order to finish the job, he's going to need Audrey's help...

And the series just keeps getting better!

Kaldar Mar was a favorite character of mine from Bayou Moon. He’s doesn’t come across as serious as some, and definitely has a few quirks, like his gambling problem. However, he is good enough at what he does to have been hired to find an important object. With his connections in the Weird, he believes this job is going to be a piece of cake and off he goes, not realizing he has a couple of surprises on board. It was also a real treat to discover Kaldar’s mode of transportation. It was pretty cool and interesting.

Then Kaldar meets Audrey. You could kind of say they are like for like. They both have theiving backgrounds. Though Audrey is determined to leave her family and that life behind her. But one of her past jobs has come back to haunt her and she must find the thing that was stolen and get it returned to save her family, despite not being really sure why she’s so worried about them. She doesn’t have a really good relationship with them.

Fate’s Edge has Kaldar and Audrey butting heads and working their way towards getting back this important object. Their schemes are inventive and adventurous. Not to mention dangerous. But I couldn’t help waiting for the amusing fights or scenes at the end where Kaldar and Aubrey would have their arguments. They were attracted to each other, but they were both stubborn as hell.

Fate’s Edge had me on a roller coaster. I was excited by all the adventure and danger, I was sucked in by the rocky romance and I was laughing at the characters and some of the things they would get up to. All rolled into one, this was a great read. I loved these two characters and the new parts of the world we learn about. I’m definitely getting the hang of this world and the series itself sticks with me more with each book.

The narration with the different accents was spot on. I loved Renee Raudman’s take on Kaldar and Aubrey. This is an author/narrator match made in heaven. It’s like Raudman is in the Andrews’ head and knows exactly how to make these characters come to life!