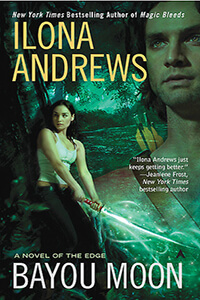 Cerise Mar and her clan are cash poor but land rich, claiming a large swathe of the Mire, the Edge swamplands. When her parents vanish, her clan's long-time rivals are suspect. But all is not as it seems.
Two nations of the Weird are waging a cold war fought by feint and espionage, and their conflict is about to spill over into the Edge-and Cerise's life.

I have to admit, I enjoyed Bayou Moon more than book one. Cerise is an amazing character and I loved William.

Cerise has a huge family and there are so many characters to get to know. Some I instantly loved and others I had suspicions about. A lot of the family members are fine in the heirarchy of the family, while some are wary of Cerise’s position as leader until her mother and father are found.

I felt bad for William. Trying to woo a woman as strong as Cerise, especially in the middle of the dangerous situations they are in, is tough. Cerise does not trust William and that is something he tries really hard to work on. He is hiding his true self and motives though. He is really conflicted.

Bayou Moon was full of excitement and danger as Cerise and William work towards their goals. The backwoods type of family Cerise has was a constant source of amusement for me. Renee Raudman really played that up and made those characters even funnier. She was able to keep that backwoods accent so well with all of the characters and even switch well into the cousin who seems to be so aristocratic. The grandmother was a hoot.

Although I still haven’t reached the amount of excitement about this series as I have the other two I’ve read, I’m still quite happy with this book as well as the narration. My mission to inhale all that is Ilona Andrews continues…