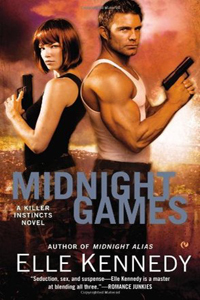 A master of disguise, Isabel Roma spends her life pretending to be other women. Normally, her emotions are reined in tight—but sexy mercenary Trevor Callaghan has a knack for getting under her skin. The elite operative’s quiet strength and raw magnetism affect her in ways she’s never felt before, a distraction that can quickly turn deadly in their dangerous line of work.

After putting his tragic past behind him, Trevor is ready to focus on his future—and he damn well intends for Isabel to be in it. When their entire operation is thrown into chaos, Trevor enlists Isabel’s talent for deception. And as they attempt to save their team in a world where the stakes are high and the danger is grave, Trevor must convince Isabel that the woman beneath all the disguises is the one worth having...

I was waiting for this story since Isabel took off on Trevor in the previous book. Isabel’s job keeps her in a different personality all the time, but also keeps her from facing her own true self. In allowing herself to accept Trevor, she has to confront the real Isabel and who she is. What she doesn’t realize is that Trevor has already made up his mind. None of her tricks and hiding behind personalities is going to dissuade him.

There was a side of me that really wasn’t happy with Isabel’s character. She’s in a tough business, but has never been involved in anything but the setups. I don’t want to say she’s weak, she just hasn’t had to play the end game. She wants that to change and is really putting on the tough exterior for this one. In trying to put herself out there like that, she just irritates and maddens Trevor. It’s like she’s playing him and that bothered me.

I really liked Trevor. He carried the alpha bit around. Trying to stake claim, despite her resistance. His jealousy did put them in some perilous positions, but to me, I melted a little. Sometimes a jealous guy just seems romantic to me. Well, jealous to an extent.

It was really surprising to see Nicole and her girls playing a role in this rescue. Morgan, Nicole & D’s characters are really intriguing. I’m interested to see how they are going to play together. I don’t think it’s a love triangle, but there are definitely some dynamics that are going to need worked out.

Midnight Games was another fast-paced adventure that kept the blows coming. I loved how the groups worked together on bringing down the bad guys. The ending brought a big O to my mouth. After the whole book and this happens? Wow, I was surprised. Definitely another fun ride in the Killer Instincts series!