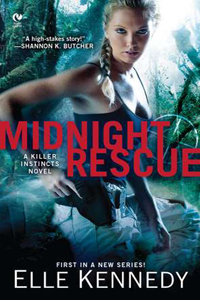 Abby Sinclair had a desperate childhood until she was rescued and adopted by a retired army ranger who molded her into a master of self-defense. Now, she's a cunning and fearless assassin thrust into assignment after dangerous assignment, using everything she has-nerve, resilience, strength, sex-to come out on top. Her only rule: trust no one.
Abby's latest assignment is in Columbia: go undercover and snuff out a dangerous arms dealer active in the underground sex trade. But when Abby purposely blows her cover in a last-ditch attempt to free the helpless victims, deadly mercenary Kane Woodland is recruited as back-up. His mission: get Abby out of that hell hole.

The last thing Kane expects is to feel a primal attraction for Abby. But when she convinces him to join her on her perilous mission, their new found passion could put the lives of their whole team at risk.

This is one of the first books I’ve read in awhile that is outside my paranormal reads. It felt kind of refreshing to take a break. The romantic suspense genre is another favorite of mine that has been on the back burner quite some time, so when the this series came up I grabbed at it.

We appear to have two different groups. A group of ex-military mercenaries run by Jim Morgan, and a deadly group of women assassins run by Noelle. They kind of run side by side until one of Noelle’s girls gets her cover blown and needs extraction. Noelle must call on Morgan and his team to go in and retrieve Abby.

Abby is devoted to her job and is very good at it. But when she discovers the girls her target has hidden away, she can’t keep silent. A rescue needed to happen right away. Abby is portrayed as deadly and cold, but the horror of what is going on has to be stopped. She is pissed when she is rescued but she had to leave all the girls behind. She immediately goes to work on Morgan’s guys to get her back in to rescue the girls. Abby has a tough shell, so it was a good thing that Kane had a little softness to him. He was able to get under Abby’s armor and make her see what they could have.

I felt like we had a lot more action than actual romance. That was ok though, as I was ready for some good kick-ass action, and there was a lot of it. The plan to rescue the girls was tricky and took everyone playing their part well to pull off.

The two groups fascinate me. I wonder how or if they will be able to work together. It will be fun seeing who of each group will get together. Abby and Kane kind of balance each other out with their personalities. It was a struggle for Kane, but with a little finesse, he was able to get past Abby’s walls and see what she could have.

I really enjoyed the start to this series. It promises to be a hard hitting, action packed series. This is definitely a series I will be following!