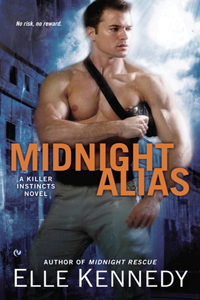 She’s smart, seductive, and in way over her head.
He’s her only way out.

An undercover DEA agent has gone off the radar. Suspecting an internal mole, the government needs Luke Dubois and his elite team of operatives to recover their man, and the New Orleans native thinks he’s found his way inside the dark underbelly of Manhattan: Olivia Taylor, the girlfriend of a mob boss and the sexiest woman he’s ever laid eyes on. His new mission objective? Get past Olivia’s defenses and convince her to take a chance—on him.

All Olivia wanted was to finish law school and live a normal life, but that dream was shattered when one dangerous night put her deeply in a mobster’s debt. Now Luke and his team will help her escape—in exchange for intel on the missing agent. But Olivia doesn’t anticipate her intense attraction to the reckless Louisiana charmer or that she’ll be forced to risk everything—including her heart.

So, I’ve gotten into this series that actually does not have any paranormal romance in it. I’m still shocked. I am finding that I really enjoy this group of mercenaries and the action that comes with them. Of course, the books would be hard for me if they did not contain a bit of romance, which they do.

Midnight Alias is focusing on Luke & Olivia. The guys are on a job looking for a missing FBI agent who was investigating mob activity. The main mob guy they are looking at is a total scum bag and crazier than a bag of nuts. He imagines himself in love with one of the dancers from his club. She is absolutely horrified with how Vince has taken over her life but is planning her escape.

Luke, the southern boy sent into the club makes the connection with Olivia. Olivia tries to stay out of things until she finds out Vince has done some things that just affect her too much. Then she wants in on the action.

More of Morgan’s crew is introduced in this book and I’m falling in love with each one of them. I don’t think I could get tired of Liam and Sully. They are just so laid back and fun to be around. Isabel from Nicole’s crew is sidelining for Morgan on this one, so we get to see a little more progression on her and Trevor’s story. Which after the ending of Midnight Alias, I don’t know how I feel about her. I’m kind of pissed I think.

Luke & Olivia have crazy attraction for each other, but Olivia is determined that their relationship is temporary. Big time daddy issues here. Luke realizes his feelings long before Olivia does and I felt so bad thinking of how she was rejecting his hopes that they could make it work. Unfortunately their crazy attraction for one another brings down a major problem. This problem was really a quick solving one, and probably could have played a bigger part. The solution though was very satisfying.

I am really enjoying this series and will definitely continue. I know Trevor’s story is next and I’m anxious to see how the relationship between him and Isabel turns out.