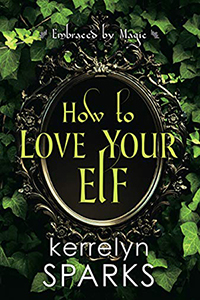 Raised in isolation on the magic-shrouded Isle of the Moon, five girls became five sisters. Now women, they are ready to claim their places in the world—and perhaps change it forever . . .

Sorcha knew the mission was dangerous. Leaving the safe grounds of her brother’s kingdom and parlaying with the elves across their border . . . well, treachery seemed at least as likely as true peace. But to support her sister, Sorcha would brave far more than the underhanded ways of the elves. Or so she thought, before she was taken hostage.

Of course, her captors didn’t count on her particular abilities—or on the help of the Woodsman, the mysterious thief who made his home in the forest. He saw the battle from the trees, saw the soldier attacking against incredible odds to save a comrade—and then saw the valiant fighter revealed as Princess Sorcha of Norveshka. He can’t tell if he wants to kidnap her or kiss her. But despite Sorcha’s stubbornness, his inconvenient honor, and a rebellion on the cusp of full war, something burns between them that neither can let go . . .

First, despite the series name change, this is actually book 4 in the Embraced series. So having this listed as Embraced by Magic #1 could be very misleading to those that may be new to the series. You could read this first, but you will be missing the back story of all the other sisters and areas. I do recommend reading the Embraced series first.

I really enjoyed the mystery behind the Woodsman. His connection to the kingdoms and the trees kept things interesting. He has earned the devotion and adoration of many people.

Sorcha was not my favorite sister. She definitely relied too heavily on the stone’s predictions. The feelings between Sorcha and The Woodsman were fought despite being a pretty much instant attraction just because The Woodsman did not meet what Sorcha’s interpretation of the stone’s prediction. I guess that is probably a good thing as it made the story last a bit longer.

The romance was definitely secondary to the wars being fought. As the previous books we work toward having a kingdom being run by an ally. The mystery of the Circle of Five is still alive and we get hints on who the members are. I was much more interested in the building of the mystery and world over the romance. Sorcha was just a bit silly for me.

I’m looking forward to the next book since Brody is a favorite character of mine. Also, the sister I’m assuming is his match is much more level headed I think. Definitely going to continue on to the next book!