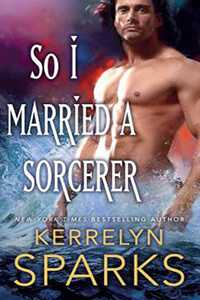 Growing up on the Isle of Moon, Brigitta knows nothing of her past, except that she is Embraced: born with powers that forced her into hiding. Everything changes when she learns she’s a princess, hidden away from her villainous half-brother who now rules the kingdom. But he knows about Brigitta, and he’ll do anything to get her back. Unless a certain roguish pirate has anything to say about it…

Rupert is both an infamous pirate and a sorcerer with the power to harness the wind. He’s been waiting nineteen years for revenge—and he needs Brigitta to get it. What begins as a kidnapping of the fiery beauty turns into a fierce attraction. But can he win the captive princess’s heart?

So I Married a Sorcerer continues about eight months after How to Tame a Beast in Seven Days. It is book two in the Embraced series by Kerrelyn Sparks. So I Married a Sorcerer features Brigitta. She is one of the adopted sisters from the Isle of Moon. The sister Luciana from book one has the gift of foresight and they use the Telling Stones game to each other’s future. Brigitta is worried about hers after Luciana predicted she would meet her tall and handsome man but that there would be seven suitors for her hand. Despite playing the game over and over in hopes of changing the prediction, it continues to tell her the same thing.

The sisters are on their way to Eberon to be with Luciana as she gives birth to her baby when they are approached by ships from Tourin. Those ships are demanding that Brigitta come with them. Here is where Brigitta learns where she comes from and what she is. As they debate the release of Brigitta, the ships are attacked by pirates who also demand Brigitta. Brigitta ends up on the pirate’s ship with the legendary pirate Rupert.

Rupert has led a secret life and his pirate persona is just one he is using until his plan for revenge on the king of Tourin is in place. Part of his plan involved Brigitta, but their relationship soon grows to a point where he realizes he can’t go through with it. Another option is presented and he becomes involved in the plot Brigitta’s brother has to hold a competition for Brigitta’s hand in marriage.

So I Married a Sorcerer was a lot of fun. Seeing not only Brigitta and Rupert’s relationship grow as well as a secondary romance that builds was exciting. Brigitta is brave and smart, coming up with plans to keep Rupert from getting in trouble as well as getting her safely back to her sisters.

The competition was exciting and I was sucked in rooting for Rupert to defeat the opposition. The story takes you on a great adventure across the lands and a character from book one continues to cause problems for the couple in this book.

I had a great amount of excitement with Brigitta and Rupert. Their story was romantic and with an edge of Brigitta’s overly dramatic ways. I loved the couple and the secondary couple’s relationship was a lot of fun too. I’m not normally a fantasy reader, but I’m really enjoying this series. Kerrelyn Sparks writing is very fluid and she includes a lot of great laughable moments. It makes me really eager to read her paranormal series. I think I would have a lot of fun with it.