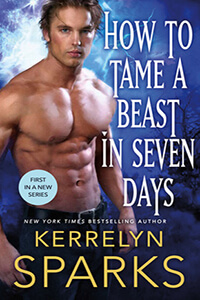 From the brilliant imagination of Kerrelyn Sparks comes a bold new fantasy romance series in which passion and magic collide. Behold the Embraced...

As one of the Embraced—one born with magical powers—the beautiful, innocent Luciana escaped certain death after her father hid her away on the Isle of Moon. Now, nineteen years later, her father has returned with a frightening request. He will be executed unless Luciana returns to the mainland and marries a man feared throughout the land: a terrifying brute known as the Beast.

Luciana accepts her fate and agrees to wed the Beast—Lord Leo—in order to save her father. Soon she learns that her betrothed is also one of the Embraced. With the ability to wield lightning, Leo’s immense power strikes fear into the hearts of men. . .and his mere touch can put an end to a woman’s life. But Luciana cannot deny the passion that burns between them. How can she resist the man who scorches her soul and makes her feel intoxicated with desire—even if surrendering to him could destroy them both?

I had been intending to try the Love At Stake series by Kerrelyn Sparks for some time now. Then The Embraced series popped up, and despite the setting, thought I might start with it and get a sense of this author’s writing. I was pleasantly surprised. I normally do not read, or even tend to like books based on different worlds. That might be better described as fantasy worlds. I would always feel like I was trying to catch on to all the little nuances of the world and still stay with the story being played out. This world that Kerrelyn Sparks created was SO nice. There was not a lot of world-building sequences trying to describe things as the story went along. You are given a bit of an overview at the beginning, which is fine with me, but you are not taken out of the main story by long descriptions of how certain things work. This was all a big, big plus for me.

Our main heroine, Luciana is a well constructed character. Despite growing up in a convent for her first 18 years, she quickly adapts to becoming a totally different person with everything including a new accent. As Luciana learns of the new world she is in and what is expected of her, you gain more knowledge of how truly good and innocent she is. Nothing like her sister, which causes a bit of confusion, but the Duke is quick to explain “Tatiana’s” change in attitude. Luciana is a character you can really connect to and respect for sticking up for her values and defending her goodness.

Leo is someone I felt bad for from the beginning. He doesn’t come across completely enraged with his lot in life, more defeated. He has learned to live with his gift and all that he has to do to protect those around him because of it. He has spent his whole life not knowing the touch of another person and avoiding his uncle’s attacks on his life. Leo seems to be content, although not happy, with his life until he meets his betrothed. Then his gift becomes something that keeps him from something he truly wants more than anything.

I really enjoyed this couple as they got to know each other, trying to avoid being killed by the king’s assassins all the while. Luciana’s gift makes for some fun moments. Getting to know her sister was quite interesting. Tatiana was not the easiest person to get along with.

Luciana and Leo’s story had very little down time and read along at a good pace. I found myself totally invested in these two main characters and trying to think of some way that they could be together. Kerrelyn Sparks pulled that off wonderfully. How To Tame A Beast In Seven Days overcame my resistance to alternate worlds and gave me my favorite mix of action and great love story. I definitely enjoyed this book and can’t wait for the next one!