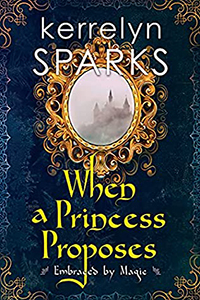 All Princess Eviana needs is an escape. Possessed of an unfortunate and unusual Embraced gift, which she’s been banned from using, she required no training. Now, her overprotective parents want her to wed. As a result, the palace is crammed with obnoxious noblemen. . . . Until Quentin, the enigmatic eagle shifter and royal spy, maneuvers several of the unsuitable suitors into revealing their most embarrassing secrets before the court. Finally, Eviana has an excuse to free herself. If only her family knew the blow that’s shaken her: golden-eyed Quentin’s refusal to let her near . . .

Heroic, but low born, Quentin’s infatuation with Eviana is as inappropriate as it is unshakable. He must keep away from her, for his own sake. But after a series of suspicious deaths, and the princess’s narrow escape from kidnapping, Quentin knows that only together can they expose the danger stalking Aerthlan’s Embraced. On foot, in disguise, they’ll need trust and quick wits to uncover the vicious conspiracy closing around them. But finding the truth might break down their own defenses as well .

When a Princess Proposes jumps 20 years and features the children of the original 5 “sisters” and some of the children rescued from the Isle of Secrets. This book features Eviana, Luciana and Leo’s daughter. She has been very protected and basically hidden away in the castle. Evie’s parents have been having balls, trying to introduce her to suitors. The one thing that must stay hidden is Evie’s powers.

Quentin is one of those children that was rescued from the Isle and now uses his skill of changing into a bird to be a spy for the different countries. He feels beneath the others, set apart from the families as if he were lower class. He is in love with Evie, but believes he will never have her because he is not worthy of a princess.

Despite the Seer’s first prediction that the Aerthlan would be safe for many years, she is now seeing a dark, dangerous cloud coming. It starts out with some Embraced disappearing in small towns in ways that no one would really expect it was because they were Embraced, but Quentin puts it together and starts an investigation. Then Princess Eviana is attacked on her trip to Norveshka to visit her aunt. To save the barge and the men aboard, she decides she can’t hide her power any longer. Her power knocks everyone within range out. However, it also knocks out the men on the barge, so she jumps into the water to try and get away from the attackers before they wake.

This starts the adventure to find out who is killing the Embraced as well as who was trying to take Eviana. She refuses to be left out and thinks she can use the time to win over Quentin.

I enjoyed the adventure the group was on. The plan didn’t always go as planned and needed to be adjusted a few times. The Brotherhood had spies everywhere and no one knew who they could trust. The spies they had were all Embraced so it was hard to know who to trust. There were a lot of surprises and that aspect of the story kept me reading.

The whole storyline of Evie and Quentin was just a bit too immature and silly for me. It took away from the adventure and had many cringey moments. I admit I skimmed some of those scenes. It did get to a happy ending, but I was more impressed with the way everyone conquered the Brotherhood versus the resolution of the romance portion. I don’t see it classified as such, but I would more likely put this in a new adult category.

However, if you just want a fluffy, easy read, this could definitely work. It does skimp a bit on world-building, but not badly. It is to be expected when it is book six in a series. But since it is generation skip, you can definitely get by without the previous books.