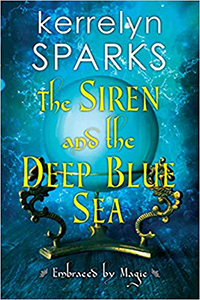 Four sisters have become queens, rulers of all that Aerthlan's two moons embrace. The last sister will forge her own path . . .

Raised on the magic-seeped Isle of Moon, Maeve is used to unusual powers--and the way they fuel the politics of her world. But when she discovers an ability to shape-shift at will, she knows who she wants to share it with first. Brody, the enigmatic, infuriating shifter-spy has always made time for Maeve. But it's been almost two months since she's seen him. And though no one else believes Brody is in danger, Maeve is more than ready to rescue him herself.

The rumors Brody's investigating are terrifying: a secret army of magic-users, in the service of the cruel Circle of Five. But when he uncovers the identity of one of the Five, the mission becomes personal. Cursed as a boy by the Sea Witch, Brody can spend only two hours a day in his human form, a restriction that limits his future and muzzles his heart. Plus Maeve teases him for being such a pretty doggy instead of appreciating his manly charms. To win his freedom, he must take on a terrible disguise. And when Maeve finds out, she'll unleash a tempest like no other . . .

The final book in the Embraced By Magic series tells the story of the remaining sister (who has not married a king) and the ultra-elusive Brody. Maeve feels totally left out of her sister’s life’s then the only person she felt she could relate to has disappeared. His disappearance has made a huge impact on her and she is determined to find Brody.

I really love Brody’s character. Cursed to be human for only 2 hours a day, he feels like a relationship is out of the question for him despite his attraction to Maeve. He has been putting his time away to good use investigating the Circle of Five and has made great progress. Then Maeve shows up to talk to the Seer in hopes of finding out where Brody is. He does his best to hide from her in his new-found ability. I did find Maeve kind of annoying and whiny at the beginning. However, the more into the story I got, her character seemed to become more mature.

The Siren and the Deep Blue Sea brings out startling relationships that make everything more complicated. The reveals and the deception were a lot of fun and I felt like I was on a secret mission with them all. I love Maeve and Brody together. Brody seemed so far from being ready for a relationship, yet Maeve was so convinced. This was a great ending to the tale of the Embraced sisters. All of the surprising information brought the whole series together.