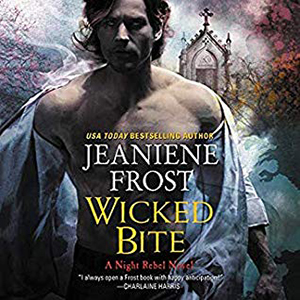 Some promises are meant to be broken...

Veritas spent most of her life as a vampire Law Guardian. Now, she's about to break every rule by secretly hunting down the dark souls that were freed in order to save Ian. But the risks are high. For if she gets caught, she could lose her job. And catching the sinister creatures might cost Veritas her own life.

Some vows are forever...

Ian's memories might be fragmented, but this master vampire isn't about to be left behind by the woman who entranced him, bound herself to him, and then disappeared. So what if demons, other Law Guardians, and dangerous, otherworldly forces stand against them? Come hell or high water, Ian intends to remind Veritas of the burning passion between them, because she is the only person seared on his mind--and his soul...

Wicked Bite was a long awaited book. At first I had to really think to remember the events from Shades of Wicked, but once I was sucked into this story the little hints and tidbits along the way helped jog my memory.

I love Ian and his determination to get his memory back and return to his wife made me love him more. Veritas was regretting her decision so I think she was secretly happy that her plans to protect Ian fell apart. Truly they are stronger together than they are apart. The couple are trying to defeat the demons after them before the demons get them first. This makes for a fast paced adventure that kept me listening totally entranced.

The way Ian and Veritas work together is totally in sync. Add in their romantic times and the mix makes for an amazing listen. There are some mentions of past events, both from the previous book as well as the last book or two from the Night Huntress series. That can be a little confusing but not enough to take you out of the story. I will admit, I needed the reminders!

The ending of Wicked Bite had me totally frustrated. If I wouldn’t die from doing it, I’d be holding my breath waiting for Wicked All Night. Thankfully I’m seeing this is a 2020 release so I will not be suffering for long.

I am new to listening to this series. I read the ebooks of the Night Huntress so I had a voice in my head for Bones. This voice doesn’t quite match what the narrator uses. I’m good with everyone else’s voices, just Bones kind of throws me off. Not enough to keep me from devouring this series though!