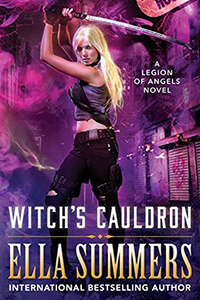 "A month ago, I watched in horror as six of my fellow initiates died after sipping the Nectar of the gods, a heavenly drink that either grants you magical powers or kills you. I can't believe I'm coming back for seconds." Leda Pierce has survived the gods' first test and gained entry into the Legion of Angels, but the fight is far from over. Someone is poisoning the supernaturals of New York. Suspecting witches, the Legion sends in Leda to investigate. To save the city, she will need magic she doesn't have-and gaining that magic might just kill her. Now her survival depends on accepting help from the darkly seductive angel Nero, but that help comes with a price she cannot afford to pay.

I am so excited by this series, The Legion of Angels!

We continue on right from Vampire’s Kiss, where the Legion is investigating the involvement in demons with the witches in that fight. However now there are attacks that seem to be coming from the witches and the Legion is left to wonder if they have not contained all those involved with demons.

Leda, despite her attitude and Nero’s strict rules on what constitutes hand to hand fighting, is considered a great asset to the Legion. Nix, the First Angel, notices this in her and orders Nero to move Leda up to second level. She also wants Leda in on the investigation of the witches and the explosion that killed so many vampires as well as the poison attacks that are still ongoing.

Leda is strong-willed and has a hard time following orders. She tries like hell to be the best Legion officer she can, but she has a hard time controlling her mouth and the feelings that keep coming up between her and Nero. Leda was a bounty hunter before her Legion days, so she does have her own investigative techniques. She takes on a lot and she’s one of those personalities that can work in many different tasks and still get up early for a little extra training. I’m kind of jealous of her energy. Of course, she’s already had the God’s first gift, so that could be contributing!

Witch’s Cauldron was exciting with a lot of action. The relationship parts really stressed me out. I want the two of them together, but they just can’t seem to get to the right point. I was happy that Leda got to see Bella in the midst of her investigation. I was a bit worried for her though, and even Nero asks Leda if she’ll be able to work the case with her sister in potential danger.

When Leda and Nero work together though, without Nero worrying about appearances to other Legion members, the two seem to make major headway in the case. I was surprised by the actual villians and then scared to death for them as they are stuck in a pretty bad situation. It was exciting and there were a LOT of times where I was holding my breath wondering what was going to happen. It was especially worrying when Leda and Nero end up getting hit with attacks that actually affect them. I had thought that Legion members were immune to magic. I almost want to rewind and listen to the last few chapters again to make sure I got it all!

The Legion of Angels series by Ella Summers is exciting and a lot of fun, with some relationship frustration mixed in. I am excited to move on to Siren’s Song where we’ll continue the investigation into demon involvement and hopefully a lot more of Leda and Nero!

Cris Dukehart is one of my favorite narrators and I think she does a wonderful job keeping up with the energy that Witch’s Cauldron has. She definitely makes it worth listening to.