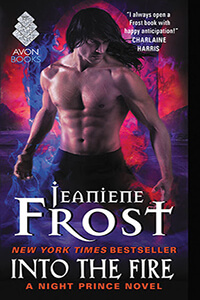 In the explosive finale to New York Times bestselling author Jeaniene Frost’s Night Prince series, Vlad is in danger of losing his bride to an enemy whose powers might prove greater than the Prince of Vampire’s….

In the wrong hands, love can be a deadly weapon.

For nearly six hundred years, Vlad Tepesh cared for nothing, so he had nothing to lose. His brutal reputation ensured that all but the most foolhardy stayed away. Now falling in love with Leila has put him at the mercy of his passions. And one adversary has found a devastating way to use Vlad’s new bride against him.

A powerful spell links Leila to the necromancer Mircea. If he suffers or dies, so does she. Magic is forbidden to vampires, so Vlad and Leila enlist an unlikely guide as they search for a way to break the spell. But an ancient enemy lies in wait, capable of turning Vlad and Leila’s closest friends against them…and finally tearing the lovers apart forever.

I cannot for the life of me figure out why it took me a year to read this book! I could have been putting it off because it was the last book of Vlad & Leila’s story, and I didn’t want it to end. But really, I think it got buried in this enormous TBR.

I am going to admit that Vlad and Leila were a disappointment after Cat & Bones. Vlad is so cold and calculating. When he puts his walls up with Leila I almost feel like he is being cruel to her. Then she keeps things from him to keep from going nuclear. That bothers me too. Still, they are hot together. The intensity of Vlad’s love for Leila is incredible. Just as he anticipated, his love for her makes her a target for revenge against him.

Right off the bat we have the spell Mircea has cast on Leila that allows him to communicate telepathically with her and whatever bodily harm is inflicted on him affects Leila the same way. This drives Vlad mad and he is going nuts trying to find a way to get the spell removed. She hides from Vlad just how often it happens. I know, like her, it would just enrage him with no way to fix it if he knew how much Mircea is in her head and hurting her. But it still bothered me that she didn’t tell him. On the other side of that coin, if Vlad knew, he would probably put up that cold wall and shut Leila out, which really just punishes her. I find their relationship a bit frustrating.

We learn some really interesting new things about Leila and her heritage. We find out just how strong Leila can get. It was exciting to see just how powerful she could become. She really holds her own a lot in Into The Fire. She even impresses Ian, who Mencheres gets involved in the search for a counter spell. Ian gets them into some interesting situations, and the guy’s attitude can make you laugh no matter the dire situation.

There were a few OMG moments that had me gasping. I think I was just as pissed as Leila when we found out exactly what Vlad did to try and trick the enemies trying to control him. Actually, I may still be a little ticked off so I’m going to be really excited to start Ian’s series to see how he deals with the repercussions of that.

Into The Fire holds intense emotions, which is a given knowing this is a Vlad book. We see new characters come and some characters go. However, I still found that the ending was a little up in the air. I didn’t feel like there was a finality to it that should be at the end of a series. I think there was room left for some side stories in this series. At least that is what I’m hoping. No matter how frustrated with this couple I get, I am still attracted to the strong emotions the books tear from me.

For now, I will be happy with how the Night Prince series ended. I am too excited to read Ian’s story to spend much time coming up with ideas on how Vlad and Leila will complete a couple of things. I’m so glad I finally grabbed some time to get this book in. It was about time!