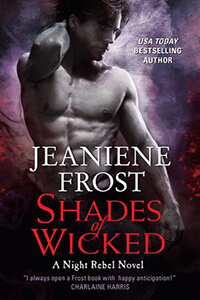 Master vampire Ian is unrepentant, shameless…and every shade of wicked. He’s made one too many enemies in his two centuries of existence, including Dagon, a demon who now lays claim to his soul. Ian’s only chance to escape Dagon is to join forces with a Law Guardian, but he’s never been able to abide by the rules for long.

Veritas’ normal role is police, judge and jury to reprobates like Ian. But she has her own ax to grind with Dagon, so if she can use Ian as bait…well, all’s fair in law and war. As they scour supernatural hotspots to perfect their trap, Veritas soon realizes Ian’s devil-may-care, roguish image hides something much more powerful. And Ian discovers that Veritas has shocking secrets of her own. As they’re drawn to each other with a passion as intense as their peril, either love or justice will prevail. But each will have devastating consequences…

I don’t know how I put off this book as long as I did. I wasn’t getting through my ebook TBR fast enough, and that is how I have read all of Jeaniene Frost’s books, so instead I downloaded the audio. I just couldn’t wait any longer.

Ian is a very popular character from the Night Huntress series. He’s totally outrageous, funny and downright sexy. People have been waiting for his book forever! In Shades of Wicked, Ian is being used to get to the demon Dagos by the law maker Veritas. He doesn’t seem to be in the least bit nervous with her. Ian has the best commentary and comebacks.

There is a lot to Veritas that is a surprise to us. There was so much to learn and Ian brings it out bit by bit. There are so many layers to her. I loved her right away. At first it was hard to see her with Ian, but the farther we get into the story, the more the two make sense.

Veritas & Ian’s mission goes through a lot of bumps, but when it comes down to the big confrontation, I was terrified of the outcome. By that time the couple’s relationship has come to a great place and the different things that Ms. Frost could put them through had me holding my breath.

Shades of Wicked seemed to go too fast for me. I instantly wanted more upon the ending. At one point I was scared I had reached the end, but I was pleasantly surprised at the ending. I cannot wait for book two now. Ian makes me laugh all the time. He makes the perfect hero. I will also continue to listen. Tavia Gilbert did a great job with the voices and accents in Shades of Wicked. I had no problems with the narration and was able to get immersed in Ian & Veritas’s story without any hitches. I’m really glad that I decided to dive into the audio instead of waiting for it’s turn on my e-reader!