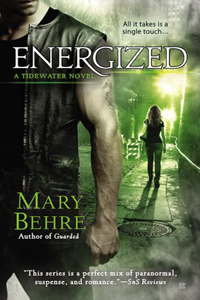 In the new Tidewater novel by the author of Guarded, a kiss between strangers draws both into unexpected danger and unforgettable desire...

Hannah Halloran has always believed in her gift. The things she sees through her psychic touch have never led her wrong before. Not when they led her to an unforgettable night with a sexy Marine at a bar. Not when she felt a need to leave her home and find the sisters she barely knows. And not now, when she is an unwilling witness to a brutal murder...

All Niall Graham wants is some peace. He’s recovering from the horrors of war, struggling to save his family’s restaurant, and desperate to forget Hannah, the beautiful woman who left him with memories of a mind-blowing night together and a bogus phone number. But a quiet life is hard to manage—especially when Hannah strides back into his restaurant with the news that a serial killer is on the loose and lurking closer than anyone could have guessed...

I am always a little leery going into a book that is not the start of the series. Energized didn’t make you feel like you missed much at all. It’s obvious that the sister’s stories are before this one, but there are not any spoilers to how they came about.

Hannah’s character grabbed me right off. She was fun and sassy. Hannah acknowledges her gift. She tries not to be too intrusive with it, but sometimes things slip through. Like the urge to seduce a certain Marine. She feels his sadness and pain. Plus he’s hot as hell. Why not help him out a little? I don’t think she planned on the connection the two of them had.

Niall is still dealing with the effects of war and the loss of his friends. He just wants to take some time and lick his wounds. He ends up being the last in the bar being run by a woman who just seems to “get” him. He’s leaving town, so what could go wrong just letting her wrap herself around him and help him forget. Of course, he also underestimates the affect they have on each other.

So, how do we not have an HEA right off the bat? Sometimes, men and women just don’t think alike. We don’t read each other’s signals. Each one thinks the other didn’t feel the connection and has gone a little cold toward the other. Until they meet up in a little town while Hannah is searching for her sisters.

I love that it was not one of those times where they see each other after so long and just run into each other’s arms. Oh no. They have to work to prove each other’s reasoning for the separation so many months back. This is all just a complication for Niall as he tries to keep his family’s restaurant together. There is a lot of tension between Niall and his brother. They are just so different, and their approaches to bringing the restaurant back to life clash. It doesn’t help that Niall is such a tough ass. He comes across as someone you just can’t please. This causes a lot of family strife.

Hannah is coming into town just as a serial killer is in town. Despite reservations, she goes to the cops with what her gift is telling her about this killer. As usual, she then becomes a suspect. The way Hannah’s gift works, the killer is near her. But who would be capable of those horrific murders. She’s new to town and knows hardly anyone, so her clues are pretty hard to pin point.

This murder case was so intriguing. We get views from the killer that just confuse you even more. Between the romance, the reuniting of the sisters and the murder case, I was so drawn in I could hardly put this book down. If this is the type of book I get from Mary Behre, you can bet I am slapping book one and two on my TBR. Energizing was so thrilling and exciting. It was awesome to get pulled so entirely into a story. I can’t speak for the whole series, but book three is definitely worth the read! 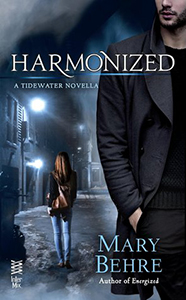 Harmonized by Mary Behr
Tidewater #2.5
After nearly dying on assignment, Tidewater police officer Zig Harmon has been awarded the Silver Star and desk duty. But handling every case that walks through the door while his entire department is out hunting a serial killer is nothing compared to dealing with his former flame, Karma De La Cruz.

As much as she hates it, Karma knows that her best chance of finding the kidnapped baby haunting her visions is the man she once left behind. Forced to work together, Karma and Zig start to realize that they may have let go of something incredible. But now, time is running out, both for the missing infant and for their chance to start again… 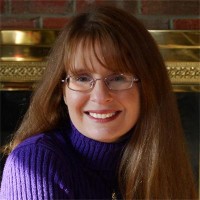 Mary Behre could never decide which kind of story she liked more, paranormal, mysteries or romances. So it only made sense that she combined all three in her books. Her debut novel, SPIRITED, is the first in the Tidewater Series. Stories with humor suspense and a psychic love-connection. When not writing in her closet/office, she can be found hanging out with the most important men her life, her family.