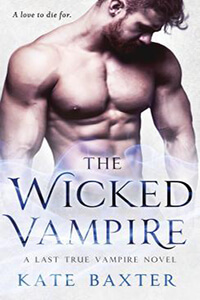 He was one of the most feared creatures in the supernatural world, and yet, she was drawn to him unlike any other. His scent ignited her thirst. The sight of him drove her mad with want...

Lovers forever--or enemies to the death?

Sasha Ivanov was born to be wild. A vampire party girl, she stalks the L.A. clubs at night. Dancing. Drinking. Indulging her darkest appetites. Never sated, she's always looking for more: more danger, more excitement, more blood. But when she enters a supernatural fight club--and is tethered to her mortal enemy--Sasha realizes she's playing the most dangerous game of all...

Ewan Brun was born to kill vampires. A powerful berserker and unbeaten champion, he doesn't need a weapon to be deadly. He is the weapon. But when his soul becomes captive to the most beautiful vampire he's ever seen, he is all but powerless. He cannot resist Sasha--and cannot fight his desires. Is their love strong enough to defeat the gathering forces of darkness that threatens to destroy them both?

Wicked Vampire by Kate Baxter features Sasha and Ewan, a vampire and a berserker. Two enemy factions for centuries. One with a crazy leader who even treats his own kind with violence and fear.

Sasha went a little wild after being turned and having Saeed leave town and find his mate. She gets to the point where the bar scene is getting kind of boring and her friend decides to show her some underground fighting in hopes of getting rid of Sasha’s boredom. First step into the building and she finds herself tethered. Her soul returned. Her surprise turns to dread when she realizes it is a berserker that has tethered her. Up until this point Sasha just thought she was being trouble. Now she’s in BIG trouble.

Ewan is already defying his master. He’s fighting in he underground fights to earn some money to try and get free of Gregor. Gregor hoards all the money, making the berserkers live in squalor to further his cause against the vampires. Ewan and his cousin Drew are sick of it. However, Ewan does get caught when his fascination with a vampire is shown publicly and word gets around as to where he has been. Now he needs to do some smooth talking to keep Gregor from catching onto his plan and taking all of his money. He offers to use Sasha to gain information on the vampire covens so Gregor can make plans for attack.

The two start seeing each other and try to balance the inner turmoil of a berserker who does not know how to show love and a vampire who is desperate to be loved. Their feelings get tested when some demons get tired of losing money in the fights and want Ewan to throw a fight. In other words, let himself be killed. Now the two must figure out what they are willing to do for each other.

I went into the story thinking I was going to like Sasha. And I do. But she wasn’t as sassy and sarcastic as I thought she was going to be. She was more hurt from everything she’s gone through and is tired of being disregarded. She’s strong, don’t get me wrong, but she seemed more sad and hurt. Ewan is a great hero. I know berserkers are supposed to be like, the most hated species, but Ewan and his determination to get away from Gregor made him different. He took shit from every direction and kept a smile on his face. He was frustrated with himself when he couldn’t express his feelings, but I fell in love with this berserker.

There was some good action with the demons, and the mystery surrounding Gregor and his plans is continued through this series. I definitely recommend reading The Lost Vampire first. It will help to understand a little of what is going on with the characters in Gregor’s storyline. It has been awhile for me since I read it so I was a little bit lost in that area. I actually wish I had of done a reread of The Lost Vampire first, or maybe that Gregor’s part in the previous book was explained more. I remembered Saeed and Cerys and Rin’s parts, but not Gregor.

I was also disappointed that we didn’t get to see many of the other vampires from the previous books. Lucas does play a part, but we don’t even get to see Mikhail’s reaction to Sasha and Ewan’s bond.

I’m definitely glad to see Sasha and Ewan get their HEA. Their romance made the story. I didn’t feel like the demons made very formidable enemies, but really, they are fighting a berserker and a vampire. They really didn’t have too much of a chance. It seems Gregor still has some deal with Saeed, that I can’t remember, going on and I think that will continue on into our next few books.