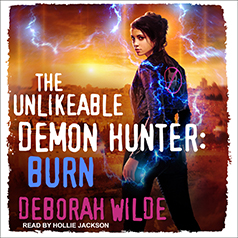 It’s the End of the World as We Know It…

Nava has come a long way from being a hot mess flying solo. She’s now one of the major players on the chessboard, leading the charge against a witch with dark magic, a power-mad rabbi, and the impending apocalypse.

Friends will die and secrets will be exposed. Add imprisonment, torture, and the biggest, baddest demon of them all who has plans for her, and it’s a lot for a girl to take in.

Time to rally the troops and make her last stand, because she’s damned if she’ll let the end of the world get in the way of her romantic, sexytimes galore, happily-ever-after.

The heart-pounding final installment to the series.

The Unlikeable Demon Hunter: Burn is the final book of the Nava Katz series by Deborah Wilde. It was highly anticipated for me as the previous book left off with a bit of a cliffhanger. That’s going to make this book pretty hard to review, especially for those that have yet to read that book.

We were left with the fate of Nava, the Rasha’s and the witches pretty up in the air. Burn picks up not long after and takes off like a shot. We are taken on an exciting, adrenaline filled ride for much of the book. “Bullshit, bullshit, bullshit, bliss” is the mantra for Nava. So much has happened to her that she is left with a bit of PTSD.

I was so happy with Nava’s growth through this series. I felt a lot of frustration through earlier books with Nava’s maturity and decision making skills. She’s grown up a lot and is ready for her life to just settle into something normal. She just wants to help people. Despite my issues in previous books of the series, I’m so glad I picked this up. It was an exciting, adventure filled series and I was completely satisfied with it’s ending. There is a novella after Burn that is for Leoni and I’m excited to listen to it!

Cris Dukehart narrates the Nava Katz series and does such a great job with all the accents from all over the world. I was especially pleased that Dukehart showed the difference between the accents of different parts of Canada. Cris Dukehart is one of those narrators I will actively seek out her work to listen to. I really enjoyed her narration of this series.