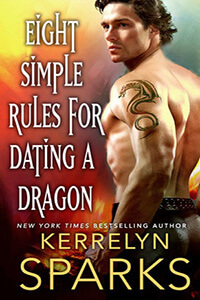 Gwennore has a talent. An Elf able to track down the cause of an illness and heal it, she’s a valuable asset to her people. But when the kidnapping of a young girl thrusts Gwennore into the very heart of the realm of the dragons, she discovers not only a place of power and magic, but also a haunted land, plagued by an ancient curse that all but ensures extinction to the royal family. But when she meets the smoldering General Silas Dravenko, they strike a bargain—save the country from its cursed illness, and he will return the kidnapped girl. She’s been raised never to trust a dragon, but never did making a deal with the devil feel so good…

Silas has no way of curing the family he’s loyally served for years. But when a beautiful elf, long considered the enemy of the dragons, comes bursting into his world, Silas is awakened to passion and desire in a way he’s never felt before. But can he trust a sworn enemy to save the very existence he holds dear? And can their love survive those that threaten to tear them apart?

Eight Simple Rules for Dating A Dragon is book three in the Embraced series by Kerrelyn Sparks. This book features Gwennore and Silas. Gwennore is an elf that was raised on the Isle of Moon along with our heroines from book one and two. Because she is an elf, with the features of an elf, she is ridiculed and treated poorly at her sister’s courts. They are determined to find Gwennore a suitor but so far have done nothing but put her in awkward situations that embarrass her. Instead of mingling, Gwennore likes to spend time with her nieces and nephews. In taking care of the children she can hide from the sneers and rude comments made towards her.

Since both Luciana’s and Brigitta’s countries now celebrate the Embraced instead of hunt them down, they join together with one big party to celebrate that season’s Embraced’s birthdays. Gwennore avoids the grand party by taking care of Luciana’s daughter as they wander away to find some flowers. However, their peace is short lived as a dragon swipes up Luciana’s daughter and Gwennore grabs on for dear life to keep from losing the girl. During this harrowing trip, Gwennore learns something new about herself and also becomes slightly attached to a dragon that saved her life.

Gwennore is put in a strange situation where the Queen of the dragon’s land believes the little girl is truly hers. Gwennore is saved from the dungeon by Silas who manages to keep the two together. During her time with the Queen, Gwennore realizes just how sick she is and believes she can help. Silas is of the same mind and believes the illness in the country and what is believed to be a curse can be cured or fixed. So despite their intense attraction, they agree to work together to save the country.

Silas proves himself capable of great wit as well as great discipline for protecting to his country. His advances towards Gwennore make it known he is interested, but she continually shuts him down, which plays a lot with his ego. Their encounters always brought a smile to my face, even when I was frustrated with Gwennore’s determination to protect Silas from the consequences of being with her would cause.

Gwennore did make some friends while in the land of dragons, and their characters were great! Each of them with a personality that brought out chuckles in some of their antics and conversations. Silas and his group of men can be serious, but also know how to rile each other up.

I loved the story of the dragons, the Redwoods and the Trolls. There is much to this country to understand and I was as fascinated with it as Gwennore was. It is completely different from the other two countries we’ve visited in the previous two books. There is so much to love about it, and yes, dragons are one of those things. Gotta love dragons!

I went through most of the story believing I knew who the bad guy was, but was surprised at the end. I probably shouldn’t have been, but this character seemed to play such a low key role in this book, it never occurred to me that it would be that person.

Eight Simple Rules for Dating A Dragon kept me turning pages with it’s witty and fun characters as well as a beautiful, unique setting. There was danger, fun and romance. I fell in love with Silas and I think my heart cracked every time Gwennore would shoot him down. It was a book of excitement and laughs. This was a great addition to this series. I am so glad I got over my whole “fantasy” thing. The world Kerrelyn Sparks has created with The Embraced series has me totally sucked in and am always surprised by new things. This is definitely a series I would recommend. I truly need to try Kerrelyn Spark’s other books. Do you have one of hers you would recommend?