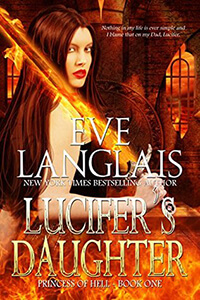 It drives my dad nuts I’m such a goody two shoes, but the fact that I’m a virgin makes smoke pour from his ears. See, I’m determined to save myself for love, but daddy dear, more commonly known as Lucifer, just wants me to stop being an embarrassment. Would it kill you to sin a little?

Maybe he’ll get his wish because I met an intriguing hunk last night in my bar. Could he be the one? He certainly melts my panties like marshmallows over the coals of Hell, but do I dare trust him? My last boyfriend thought he’d gain infamy by killing me. He’s infamous all right. Dad had him mounted on a wall, his version of modern art titled, ‘Touch my baby girl and die’. Cute in a twisted way.

My love life isn’t the only thing I've got to worry about. There’s someone threatening the denizens of Hell, and while my daddy says to not worry my pretty little head about it, I an involved because whoever is behind the attacks keeps coming after me.

Bring it. I’m not afraid. Being a princess of Hell means that sometimes I have to grab a demon by the horns and slap it around. It’s what keeps my ass looking great.

Nothing in my life is ever simple, and I blame that on my dad, Lucifer. Assassination attempts, hellhounds, and a rebellion in Hell? A piece of cake compared to the turmoil in my heart. No one ever told me love would be the toughest battle of all.

Lucifer’s Daughter by Eve Langlais follows Muriel, the daughter of Satan on her path to love. Despite her family’s disappointment, Muriel is still a virgin and has vowed to wait for true love. She lives in the mortal realm running her own bar, Nexus. Muriel appears to be a magic null, which helps make her bar a safe place for supernaturals.

One night Muriel bumps into Auric, a man with many secrets and her life changes. For once though, Lucifer is against Muriel being with someone which just brings out the rebelliousness in her.

Lucifer’s Daughter is basically a love story between Muriel and Auric. There is an uprising in hell, but the details are slim and the story doesn’t have much focus on it. I would have thought that this being a series we would have had more information on an overall arc of the uprising, but we really don’t. We have a few demons show up here and there to fight, and a battle scene, but most of the book is devoted to Muriel and Auric.

I don’t know if I just didn’t have my sense of humor on when I was listening to this book, or if the humor was just trying too hard. I think that Muriel and her personality were trying really hard to come off as funny and I just found it irritating. You are reminded almost every time she does something that she’s the daughter of Satan therefore she should or shouldn’t act or think a certain way. After awhile, it started to rub me the wrong way and I started to be really annoyed by her character.

The narration probably didn’t help my feelings toward the book. I felt that it was very monotone with not a lot of emotion and the male voices just didn’t appeal to me at all.

I’m kind of disappointed as I really hoped to enjoy this first read of Eve Langlais’s that I read. I’ve heard such good things and I was really pumped for a fun ride with Lucifer’s Daughter. It just didn’t live up to my expectations. There are too many positive reviews for Ms. Langlais’s other books for me to give up, though. So I will definitely be giving another of her books a try in the future. 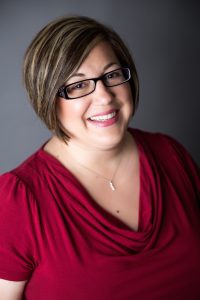 Hello, my name is Eve Langlais and I am an International Bestselling author who loves to write hot romance, usually with werewolves, cyborgs or aliens .

I should warn you, I have a twisted imagination and a sarcastic sense of humor something I like to let loose in my writing. While well known for my shifter stories, I am also extremely partial to aliens, the kind who like to abduct humans and then drive them insane…with pleasure. Or do you like something a little darker, more serious? Then check out my cyborgs whose battle with humanity have captivated readers worldwide.

If you’d like to know more, read some excerpts or find out what I’m working on, then please visit me at http://www.EveLanglais.com or sign up for my newsletter at http://www.evelanglais.com/newrelease .
I am also extremely active on Facebook: https://www.facebook.com/eve.langlais.98