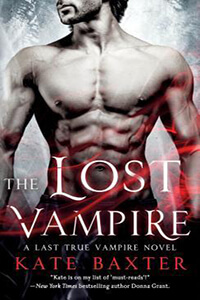 Once one of the oldest dhampirs in existence, Saeed now faces a treacherously uncertain future as a vampire. He believes that the only thing that can restore his position within his coven and tether his lost soul is the flame-haired fae who is destined to be his mate.

Cerys Bain is a soul thief. She is feared by those who dwell in the supernatural realm--and hopelessly bound to the ruthless mage Rinieri de Rege. The raw, sensual vampire who enters her world is both a threat and an intoxicating temptation: No one has ever made Cerys feel the way Saeed does. But to claim their fate as soulmates, Saeed must first find a way to free Cerys from Rin. Is their desire worth the risk of certain destruction--and eternal doom?

When I began The Lost Vampire, I was prepared to put up with some selfish, craziness from Saeed. I didn’t think he had the organization to get Sasha and Diego turned and prepared to lead his coven while he runs off to Seattle to find his mate. The Collective is driving him into madness and he sees his mate in the Collective’s memories. He has to follow the hints he received from the child Foreseer as that is the only lead he has. Saeed believes once he is tethered and his soul is returned, he will be able to get his life back together.

Saeed is going to find getting his soul back just a bit harder than he expects. Cerys is a soul stealer who has had her own soul stolen and now lives in captivity with Rin. Rin uses Cerys to collect souls of those who break their agreements with him. Slowly this is killing Cerys. Saeed believes that once Cerys has her soul back, then she will tether him. He embarks on a plan to get her and her soul away from Rin.

I have to say, The Lost Vampire made me hungry. Cerys tries to fill the emptiness that was her soul’s with food, and lots of it! Cerys tries not to get her hopes up about Saeed’s plan, and tries to keep him away from Rin. Unfortunately she ends up losing Saeed and being pushed at Gregor. What Gregor is after is a mystery. Even after he helps Saeed get Cerys, Gregor’s intentions are hidden. Saeed doesn’t wait for Gregor to change his mind and quickly gets Cerys back to LA. He’ll discover Gregor’s plans soon enough.

Cerys was a great, spunky character. Even after thousands of years being Rin’s captive, she still has an attitude with him. She’s kept a part of herself that keeps her from becoming too submissive. Saeed seems to be obsessed with Cerys, which worries her, but he is able to keep his head straight for the most part. I feel like he had desperation and I wasn’t crazy about that characteristic. It took away from the strong hero outlook I wanted to have for him. Cerys was a character I really connected with though and I loved all her scenes. I didn’t find the book as intense as I was expecting, but I did really enjoy it. We do not see much of our previous characters, probably because the story was based in Seattle, and I missed that a bit. I would like to see them all interact more.

We have some side characters who are building parts in anticipation of the upcoming war as well as their books. I am really excited for The Wicked Vampire and Sasha’s story which is coming out December 5, 2017. She begins to let loose in The Lost Vampire and I can’t wait to see what interesting things that will cause!