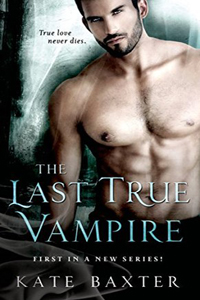 As Michael’s eyes lit on a female not twenty feet away, he knew without a doubt that it was her blood that called to him and her scent that had awakened him.This female had tethered his soul and returned it to him.

He is the last of his race. The one true king of the vampires. Michael Aristov roams the nightclubs of L.A. after dark, haunted by his past and driven by his hunger. The last of the Ancient Ones, he alone has survived the destruction of his race at the hands of the slayers. Now he is forced to hunt and feed like a common vampire, a creature of lust. Nothing in this world can fulfill his needs…until he meets a woman who’s everything he’s ever wanted. And more.

Her name is Claire Thompson. Her blood is so sweet, so intoxicating—the smell alone draws Michael to her like a moth to the flame. Sly, sexy, and seductive, Claire seems to be the only mortal who can satisfy his craving and seal his fate…forever. Can she be trusted? From their very first kiss, the last true vampire sweeps Claire into a world in which darkness rules desire—and where falling in love is the greatest danger of all…

I was able to really get into this book. It could of been me coming out of my reading slump, or too many tame PNR, but I felt like this was much grittier and just want I needed.

Being the first in the series, we are being introduced to the characters and the world. It made things roll a little slow at first, but I was soon caught up in the relationship between Mikhail and Claire.

Michael (Mikhail) has spent many centuries holed up on his own dealing with the Collective’s memories in his head. In my opinion, he was having his own, very long, pity party. There are many dhampirs that depend on his energy and life force. I think he just avoided the whole issue. There were a lot of these dhampirs waiting to be turned, but Michael just avoids it. He could have been recreating his race! All that turns around when he’s out doing a necessary feeding and he runs into a little hustler.

Claire is full of spunk. She’s a fighter and will not let the world get her down. She will find a way to survive. Then this mysterious guy shows up and she gets completely confused. He seems to have invaded all of her senses. Her character is always thinking and plotting. She’s not going to let herself get caught into a whole new world willingly.

I liked the back and forth between Mikhail and Claire. Then just when I thought things were going to work out between the two, it gets blown apart. Way to go Claire! (That was sarcastic!) This causes a reaction that brings out the dangerous villians in full force. No one is safe from them. You get stuck in the conflict of the action and relationship issues and how they are all going to come together. I will admit, I started speeding through this section. It was so tense! The trials the two go through to get to their HEA were a lot more violent and lasted longer than I expected. In other words, I think I went blue in the face holding my breath to see what would happen!

I am a bit confused on how certains things happened to Claire and how they are going to deal with them. She is the same, yet different but there doesn’t seem to be an issue right away with it. In fact it seems to be something beneficial to the race. Claire has turned everything upside down and Mikhail is now a different person.

It is going to be very interesting to see how the changes in Mikhail and Claire affect the dhampirs and the world as a whole. I’m curious about Claire’s abilities and what she will be able to do for the race. This is a great start to a new series and I’m excited to dig into the next one.