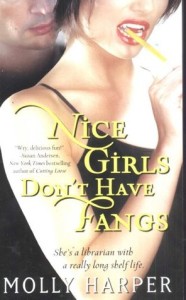 Maybe it was the Shenanigans gift certificate that put her over the edge. When children's librarian and self-professed nice girl Jane Jameson is fired by her beastly boss and handed twenty-five dollars in potato skins instead of a severance check, she goes on a bender that's sure to become Half Moon Hollow legend. On her way home, she's mistaken for a deer, shot, and left for dead. And thanks to the mysterious stranger she met while chugging neon-colored cocktails, she wakes up with a decidedly unladylike thirst for blood.
Jane is now the latest recipient of a gift basket from the Newly Undead Welcoming Committee, and her life-after-lifestyle is taking some getting used to. Her recently deceased favorite aunt is now her ghostly roommate. She has to fake breathing and endure daytime hours to avoid coming out of the coffin to her family. She's forced to forgo her favorite down-home Southern cooking for bags of O negative. Her relationship with her sexy, mercurial vampire sire keeps running hot and cold. And if all that wasn't enough, it looks like someone in Half Moon Hollow is trying to frame her for a series of vampire murders. What's a nice undead girl to do?

Nice Girls Don’t Have Fangs is a funny, snarky urban fantasy by Molly Harper. I loved her Naked Werewolf series and decided I needed to read all of her other books. I was not as engrossed in this book as I was the Naked Werewolves, but I still really enjoyed the book.

Jane is not just having to deal with turning into a vampire, but she also needs to deal with the prejudices that come with this new role. She hides this new development as much as she can from her family as their reaction to the news would be totally over the top. There are rules to southern society, and there are more than a few of her family members who live by these rules. Jane has always been sort of the rebel and this is just going to bring down untold amounts of embarrassment for them!

To make things worse, someone is out to frame her for some vampire murders, but she can’t figure out what anyone would actually achieve by having her taken out by the council. I admit, I should have seen it coming, but I was having so much fun flying through everything else that was going on, I didn’t clue in until the usual, “villian reveals all” scene. Well, I had a small, niggling suspicion of who it was, but the whole point of what the person was doing totally missed me. Which is good, because that is what you want the book to do. You want that surprise.

Jane is a fun character, and I love her obsession with books. I am sure we can all relate. I am going to really enjoy watching her grow into her new life, because I will definitely be continuing this series!

Amanda Ronconi does the narration for this series as well, and I love that she went from the northern accent in the Naked Werewolf series, to the southern accent she has in this series. She is definitely a “must listen” to.