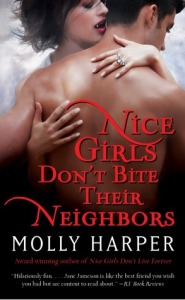 Just as Jane Jameson’s unlife seems to be stabilizing, fate sinks its fangs firmly into her butt. Despite her near-phobia of all things marital, her no-frills nighttime nuptials to her sexy boyfriend Gabriel are coming along smoothly. But the road to wedded bliss gets bumpy when a teenage acquaintance is fatally wounded in front of Jane’s shop and she turns him to save his life. The Council pronounces Jane responsible for the newborn vamp until he can control his thirst.

Jane’s kitchen at River Oaks barely holds enough Faux Type O to satiate the cute teen’s appetite and maintain Gabriel’s jealous streak at a slow simmer. As if keeping her hyperactive child from sucking the blood out of the entire neighborhood isn’t enough to deal with, the persnickety ghost of Jane’s newly deceased Grandma Ruthie has declared a war on the fanged residents of River Oaks. Suddenly,
choosing monogrammed cocktail napkins and a cake that she can’t eat seems downright relaxing in comparison.

Tensions inside the house are growing…and outside, a sinister force is aiming a stake straight for the center of Gabriel’s heart. Most brides just have to worry about choosing the right dress, but Jane fears that at this rate, she’ll never make it down the aisle for the wedding all nice girls dream of…

Such a whirlwind! As the other books in this series, Nice Girls Don’t Bite Their Neighbors is just a crazy ride! As usual, Jane finds herself doing something unexpected and places herself in a new role that she needs to adjust to. The complicated part is trying to adjust to this new role at the same time that all the other craziness in her life is going on.

Despite her previous protests, Jane finds herself planning a wedding. If you can just imagine the kind of excitement their daughter’s wedding would cause in a mother, then times it by 10 when it comes to Jane’s mom! It would be one thing if Jane had the time to actually participate in the planning and reign in her mother, but life just does not go smoothly for Jane. So we just hang on as Jane tries to juggle all the things on her to-do list.

I got a good laugh out of this book. Grandma Ruthie and her plot line had me laughing so hard! We only thought she was mean before! The characters in this book have such great quirks that even the bad guys will make you smile.

I’ve had a really good time with the Jane Jameson series and am looking forward to seeing these characters in Molly Harper’s spin-offs. I will miss Jane and the gang for sure.