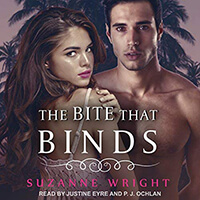 It’s just over a week until Sam will be Binding with Jared, and the only thing she wants is to spend that time relaxing and preparing for the ceremony. Unfortunately, she seems to be asking too much of fate, because suddenly she’s lumbered with a number of distractions that have the potential to postpone, or even cancel, the Binding. There’s a guarded fiancé to crack, a complicated assignment to deal with, Jared’s ex to alienate, and a bunch of snobbish Master Vampires to win over – or offend, whichever. On the upside, things couldn’t possibly be any worse, could they?

Actually, yes they could. Due to a cruel twist of fate, something strange is happening to Sam –something that is changing her in ways she doesn’t like or understand. With the help of Jared and those closest to her, she has to not only handle the threats to the Binding Ceremony, but find a way to fix what has been done to her – and fast.

Warning: This book contains a stubborn and occasionally homicidal female vampire, a powerful and overprotective male vampire who refuses to lose her, and scenes of a sexual, explicit nature.

The Bite That Binds by Suzanne Wright is book two in the Deep In Your Veins series. Again we focus on Sam and Jared as they prepare for their binding ceremony. But despite all the festivities, there are some obstacles the pair and squad must face along the way. I love that we didn’t just dwell on the binding, the insecure feelings and even one evil bitch. There was also a storyline that we could sink our teeth into that the squad must handle.

Sam finds herself in a very bad predicament after an encounter at a job the squad takes on. It is affecting her in strange ways at a very inopportune time. She’s got to be at her best to beat the prejudice and doubt of the vampire race, but is finding it incredibly difficult to hide her problem. I have to say. I LOVE Sam’s reactions to things. Have a little jealousy, turn into a murderous, sarcastic bitch. It is so much fun to see her banter with those who would take her on.

Jared goes absolutely nuts with protectiveness and at times it can be overwhelming. Once his past comes out, you can kind of understand his way of thinking, but sometimes I think he goes overboard in trying to protect Sam. It annoys her but she lets him know where he stands and she is going to do what she wants. I was definitely with her. His constant demands that she stay behind and how he wants her to be safe got a bit old. Hopefully he will learn to have a little more confidence in Sam and not be so overbearing. it might take awhile though, after the events of this book!

Just when I thought everything had settled in and we were near the end and the binding was set, we get hit with a bump in the road. I was so freaked out by what was happening! It reminded me of something that happened in another series so I was really dreading what was to come of Sam. Thankfully, because of an awesome binding gift that Sam receives, the day is saved.

The Bite That Binds was so good. It was filled with great dialogue, lots of action and loads of mystery. I’m enjoying this series so much, it is definitely binge worthy.

Once again, the audio was amazing. I love Justine Eyre and her accents are great. She gets more voice time than P.J. Ochlan which is fine with me as I prefer Sam’s POV anyway, but he does do a good job with Jared’s POV. It is definitely a series you would want to listen to!