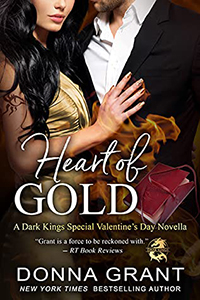 Return to Dreagan for a special Valentine's story featuring Constantine, the King of Dragon Kings, and his mate…

He’s loved her for eons, wanted her forever, and a day never passes without her at the forefront of his mind.

The only way Con could pass the time as his fellow Dragon Kings slept away the centuries was to record his thoughts in journals: one for his responsibilities as King of Dragon Kings, and another for the object of his desire. Now that she’s finally back in his life and his arms, it’s time she learns the truth. He played a part all those eons—maybe a little too well—but he never stopped loving her, and his journal will show her just how much.

But Con is the one in for a surprise as his mate turns the tables on him and leads him on a merry chase. If he can find her, he knows he’s in for something special. But then again, every day is extraordinary with his love by his side. And, thankfully, their future has never looked brighter.

We return to Draegan for this Valentine’s story featuring our favorite couple, Con & Rhi.

Rhi finds one of the red journals that Con has spent centuries using. She can’t help but read the torment Con had gone through after he gave her up for the Kings. As usual, Rhi plans something that will make all the good memories of their time together replace those hurtful ones.

Even though Con & Rhi have had their HEA, it is still nice to be brought back to check in on them. Rhi has always been a firecracker throughout the series and it is fun to see what kind of mischief she will get into at Draegan.

Heart of Gold revealed to us the secrets of the journals which was something we all had been wondering about before while making our hearts warm at the lengths this couple will go to for their love. If you are still craving more Con & Rhi, these novellas really hit the spot.