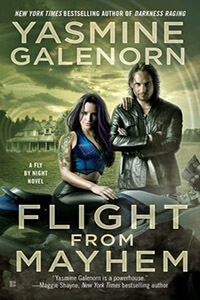 I'm Shimmer, a blue dragon shifter. Thanks to a mistake, I was exiled from the Dragon Reaches and sentenced to work for gorgeous, exasperating Alex Radcliffe, a vampire who owns the Fly by Night Magical Investigations Agency. Every time I turn around, somebody's trying to kill us. But you know what they say: All's fair in love and bounty hunting...

A serial killer is stalking the elderly Fae of Seattle, draining their bank accounts before brutally murdering them. When Chase Johnson asks for our help, Alex and I discover that the sociopath is also a doppelganger—able to change shape to match his victim's deepest desires. Our friend and colleague Bette volunteers to act as bait, but the plan goes dangerously awry. Now, unless we find her first, she's about to face her worst nightmare.

Alex and Shimmer have moved on in their relationship after they came together in the first book. They are not exclusive but come together and basically are a couple in a lot of ways. I feel awkward with them. I think it is my feelings towards Alex. He is a character that I feel is kind of wishy washy. He knows what he wants, but he isn’t man enough to follow through. With as many things that happen during this book due to Alex’s ex, Glenda, you would think he would be taking a little stronger stance on what is going on. Glenda causes a lot of damage in this book and by the end he has still to confront her! But yet he claims he loves Shimmer and wants them to be exclusive. It’s a good thing that Shimmer is still unsure of how to react and work in human relationships, or she may be royally pissed.

I took a deep breath, letting it out slowly, then tried again. “You seriously believe you can calm her down with a little chat? Alex, you know what she’s like. How many things of yours has she broken over just the past few months? How many temper tantrums has she thrown? You were in a relationship with the woman for years. By now I think you should have a pretty good idea of what her reaction is going to be.” Alex just stared at me.

Besides that little romantic sidebar, our main focus is on the Agency and the cases it takes in. Fly by Mayhem has one major case that the gang works on, but also has side cases that come up during that time. They are approached by a young witch who has accidentally let something loose on the city and a ghost who is stuck in this world.

Our main case involves a serial killer who is targeting single, somewhat elderly people. Killing and taking everything they have. They have been called in by Chase Johnson, a detective who is swamped and believes the Agency can take care of the problem. There is a lot of trying to figure out just who and what this killer is. Just when they think they have the answer, they are found out to be wrong. Thanks to Tonya’s book, they are able to narrow it down and figure out what the thing is. Now when you read this book, and you get to the part where this thing is named, come back and tell me if you have any idea how to pronounce this being. I have never heard of this thing, (which is bound to happen in urban fantasy), but my mind had no idea how to make this name a word. Every time I came across it, I had to stop and try to figure it out!

The case then becomes personal. They are in a race against time, but luckily Tonya’s book comes in handy again and the team is able to put the pieces together fairly quickly. The rescue did not really blow me away. Another new creature is introduced, but I was disappointed in how quickly the scene went down. I felt like the ending was rushed.

Chai is around to help out and I think he is my favorite character. He just pops in and out, getting what people need and checking on things. He has a chilled kind of vibe that I really enjoy. Also, he likes cats. How can you not love him!

The secondary characters are all experiencing some kind of personal problems that will probably lead into following books. I’m interested to see how those play out. I’m anticipating that they will come in as side plots while we have a bigger case for the agency. I can’t wait to find out Bette’s secret!