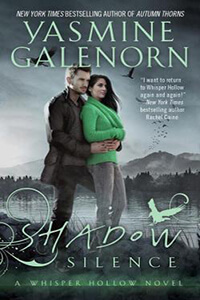 Fifteen years ago, I ran away from Whisper Hollow, Washington, a small town on Crescent Lake in the Olympic Peninsula. But truth is, if you were born here, you can never really leave. I'm Kerris Fellwater, and I'm a spirit shaman. It's my responsibility to drive the dead back to their graves, because around Whisper Hollow, people—and secrets—don't always stay buried.

My best friend Peggin finds herself under a curse after she is almost taken by the Lady of the Lake, and the Unliving are determined to drag her back to the hungry waters. As Bryan—my guardian and mate—and I work to break the hex, we uncover a dark and violent mystery from the past. One the Hounds of Cú Chulainn will do anything to guard—even if they must summon a legion of the dead to destroy Whisper Hollow.

Shadow Silence features Kerris and the inhabitants of Whisper Hollow. Whisper Hollow is not only the home of magical, mythical characters, but the town itself has a life of it’s own.

Kerris’s best friend has decided to buy a house perilously close to the lake. This is a dangerous place to live as the Lady of the Lake has been known to take those who venture too close. A lot of scary things happen even before Peggin can get fully moved in. The Lady is hungry and the last place that Peggin should be in near the lake.

Along with solving the problem of Peggin’s place to live, there is an evil, historic plague hovering over the city that Kerris and the Crescent Moon Society must settle.

For most of the book I found that there were two different stories going on. The part of Peggin’s house and the mysterious happenings (which involved even more than the Lady) gave us a surprise. The Hounds of Cú Chulainn have brought about a cloud of trouble that is threatening to take over the city. I think even Kerris was surprised about the magic the Crescent Moon Society was able to pull together to conquer Magda’s threat.

There was a little romance in the book, besides the Kerris and Bryan relationship, which had already been built. We have a new character that Peggin has met, Deev, and he is such an interesting character! He is an artist but he puts quite the touch into his creations. The pair are so cute together. Their characters need some nudging. It kind of reminded me of high school.

There was some good magic with some fast paced action. I didn’t feel like there were too many dull moments. They did take time to have their own special holiday celebrations, but they stayed on the case pretty consistently. I did have some surprises, and there were times I was concerned on how some situations were going to work out. One thing that stuck out to me was their eating. Those characters know how to throw back some food! Definitely one of their favorite past times!

Shadow Silence is a book where you definitely need to concentrate to keep track of the characters with their magic and their roles. As with the first book, Autumn Thorns, I found things moved quickly. Focusing on the story sometimes made me lose track of who was who. Especially when it came to who was a member of which group. I enjoyed the ride that Shadow Silence put me on. There were a lot of aspects and characters I will probably need another book to get straight, but it was a lot of fun!