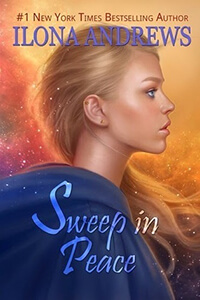 Dina DeMille isn't your typical bed and breakfast owner. Her inn defies laws of physics, her dog is secretly a monster, and the only permanent guest of the inn is a former galactic tyrant with a price on her head. The inn needs guests to thrive and guests have been scarce, so when an arbitrator shows up at Dina's door and asks her to host a peace summit between three warring species, she jumps on the chance. Unfortunately, for Dina, bridging the gap between space vampires, the Hope-Crushing Horde, and the merchants of Baha-char is much easier said than done. To make the summit a success, she must find a chef, remodel the inn, keep her guests from murdering each other, and risk everything, even her life, to save the man she might fall in love with. But then it's all in the day's work for an innkeeper....

Sweep in Peace is book two in Ilona Andrews’ Innkeeper Chronicles series. In this series we have Dina who runs a special bed and breakfast for otherworlders. Dina’s job is to stay neutral and protect all those under her roof. That job is put to the test in this book as she becomes host to peace talks between three different warring parties vying for control of a planet.

There was so much going on in Sweep in Peace! I don’t know how Dina kept up with all that was going on with each group staying at the inn, including the arbitrators! There is a lot of political posturing and keeping track of everyone’s laws and traditions was kind of difficult. There are some surprise characters who make an appearance, crossing over from another series. I was alerted to this before I started the series so I was watching for them. If I hadn’t known their past, I don’t think I would have ever made the connection.

Sweep in Peace kept my mind running with all the little things going on and wondering how they were all going to piece together. It was quite the adventure and I enjoyed it so much. Especially when we get a surprise guest who I was thinking I wasn’t going to get to see.

After all that Dina and the inn go through, I couldn’t help but feel a little let down about the inn’s status. I felt they deserved more! This is a great adventure with twists and turns. So much fun!

I can’t stress enough how great it is to listen to Renee Raudman’s narration to this series. She does an awesome job with all the accents and keeping such a huge cast of characters individualized. I definitely recommend listening to the audiobook!