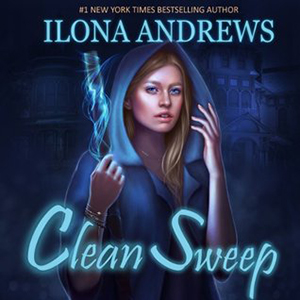 On the outside, Dina Demille is the epitome of normal. She runs a quaint Victorian Bed and Breakfast in a small Texas town, owns a Shih Tzu named Beast, and is a perfect neighbor, whose biggest problem should be what to serve her guests for breakfast. But Dina is...different: Her broom is a deadly weapon; her Inn is magic and thinks for itself. Meant to be a lodging for otherworldly visitors, the only permanent guest is a retired Galactic aristocrat who can’t leave the grounds because she’s responsible for the deaths of millions and someone might shoot her on sight. Under the circumstances, "normal" is a bit of a stretch for Dina.

And now, something with wicked claws and deepwater teeth has begun to hunt at night....Feeling responsible for her neighbors, Dina decides to get involved. Before long, she has to juggle dealing with the annoyingly attractive, ex-military, new neighbor, Sean Evans - an alpha-strain werewolf - and the equally arresting cosmic vampire soldier, Arland, while trying to keep her inn and its guests safe. But the enemy she’s facing is unlike anything she’s ever encountered before. It’s smart, vicious, and lethal, and putting herself between this creature and her neighbors might just cost her everything.

The Andrews have created a new, interesting world in the Innkeeper Chronicles. We have vampires, werewolves and all kinds of species with an otherworldly explanation for them all. It is really original and sets the stage for the imagination to run wild.

In Clean Sweep, the first book of the series, we meet Dina Demille. She is a young owner of a special kind of inn. The inn specializes in the otherworldly and Dina’s job is to serve and protect those under her roof. She is just settling into this young inn with little experience after searching the universe for her parents with her brother.

Dina’s town is being terrorized by an otherworldly creature, and even though it is not a direct threat to the inn, she feels responsible to protect the town. There is a new werewolf who has moved into town and has made it obvious that this is his territory. Dina attempts to make him responsible for taking care of the otherworldly menace, but they end up working together.

Vampires are introduced, who are on the search for the otherworldly creature. Their leader, Arland, then ends up building an alliance with Dina and Sean (the werewolf) to trap and eliminate the creature.

Clean Sweep was fascinating. The world building was done very well and was so interesting. The plot of the story was really enjoyable. Seeing the play between the characters and what the inn was capable of kept me listening. I was so scared I was going to miss something!