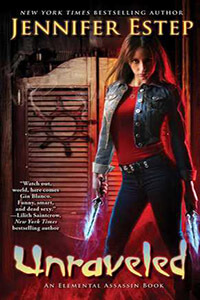 What could go wrong when you’re trying to unravel a decades-old conspiracy?

As the current queen of the Ashland underworld, you would think that I, Gin Blanco, would know all about some secret society controlling things from behind the scenes. I might be the Spider, the city’s most fearsome assassin, but all my Ice and Stone elemental magic hasn’t done me a lick of good in learning more about “the Circle”. Despite my continued investigations, the trail’s gone as cold as the coming winter.

So when Finnegan Lane, my foster brother, gets word of a surprising inheritance, we figure why not skip town for someplace less dangerous for a few days? That place: Bullet Pointe, a fancy hotel resort complex plus Old West theme park that Finn now owns lock, stock, and barrel. At first, all the struttin’ cowboys and sassy saloon girls are just hokey fun. But add in some shady coincidences and Circle assassins lurking all around, and vacationing becomes wilder—and deadlier—than any of us expected.

Good thing this assassin brought plenty of knives to the gunfight …

You know when you open an Elemental Assassins book that you are in for an exciting ride. Gin Blanco, the Spider, and her friends keep the challenges and action coming. Unraveled is no exception.

Bitter Bite was a rough ride for Finn and Gin can’t help but let him convince her they needed to take this little “vacation” to Bullet Pointe. A resort theme park that was left to Finn by his mother and this is the perfect opportunity for them all to get away, relax, and maybe learn a little more about Deidre Shaw.

It doesn’t take long for Gin to recognize the signs of another assassin. She’s seen Roxy and her moves before, and they were not playing some midday show at a theme park. Gin is suspicious by nature, but you can’t deny that she is pretty much right a lot of the time. The group have fallen into a trap and it is up to Gin to save them all.

I don’t know why, but for some reason, the level of violence Gin hands out always leaves me a little taken aback. It’s not like I don’t know she’s an assassin. Maybe it’s because when it is just her, Finn, Bria and Owen, along with her other friends, she seems so every day normal. Despite fighting her way to being the Queen of the Ashland underworld, she would seem a normal person leading a simple, normal life. Then, once more danger rains down on them and the Spider emerges. Sometimes it’s hard to believe they are the same person. I think the reason I get so mesmerized and engrossed in the violence is that Jennifer Estep knows how to write a really great fight scene. She takes it beyond what I would normally expect and I am speechless as I read faster and faster to see what is going to happen next.

In Unraveled, we see Gin step up to the plate again in defense of her loved ones. I get so fascinated with the plans that Gin comes up with when plotting to save the day. They are really original and I found I was really excited to find out how the plans would play out.

This little vacation/trap all revolves around something Deirdre hid a long time ago that Tucker, Roxy & Brody are hoping Finn can unknowingly help them with. The trip also ends up as a possible way of finding out more about the Circle. Survivors give Gin someone to continue to track, they find out more about Eira and get enough leads to make Snared one of my most anticipated upcoming releases.

Check out this excerpt from Unraveled! Check out the fun tour wide giveaway below!

Beside me, a soft creak rang out, followed by a long, loud sigh. Two sounds that I’d heard over and over again in the last hour I’d been parked here.

The man in the mansion wasn’t the only one going nuts.

“Tell me again. How did I get stuck hanging out with you tonight?” a low voice muttered.

I lowered my binoculars and looked over at Phillip Kincaid, who had his arms crossed over his muscled chest and a mulish expression on his handsome face. A long black trench coat covered his body, while a black toboggan was pulled down low on his forehead, hiding his golden hair from sight, except for the low ponytail that stuck out the back. I was dressed in all-black as well, from my boots to my jeans to my silverstone vest, turtleneck, and fleece jacket. A black toboggan also topped my head, although I’d stuffed all my hair up underneath the knit hat.

“What’s wrong, Philly?” I drawled. “Don’t like being my babysitter tonight?”

He shrugged, not even bothering to deny it. “You’re Gin Blanco, the famed assassin turned underworld queen. You don’t need babysitting.” He shifted in his seat, making it creak again, then shook his head. “But Owen insisted on it . . . The things I do for that man.”

Phillip was right. As the Spider, I could handle myself in just about any situation. I certainly didn’t need him here, but Owen Grayson, Phillip’s best friend and my significant other, had insisted on it. But I hadn’t protested too much when Phillip had shown up at the Pork Pit, my barbecue restaurant, at closing time and told me that he wanted to tag along tonight.

With the mysterious members of the Circle out there, a little backup might come in handy. Even if said backup was whinier than one would hope.

Jennifer is giving away a $25 Amazon gift card, and the publisher has offered up 5 print copies of UNRAVELED AND one FULL SET of the Elemental Assassin series! Open to US and Canada residents only.