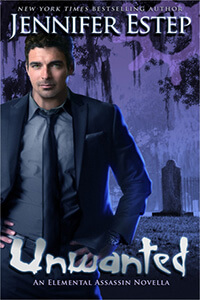 The New York Times bestselling Elemental Assassin series continues with a new e-novella--from the point of view of Finnegan Lane, the foster brother of Gin Blanco, and a fan favorite of readers of the series.

The fallout from his disastrous “family reunion” in Bitter Bite has left Finn feeling hurt, angry, and depressed. He can barely stand to look at himself in the mirror, much less eat any of the delicious barbecue from Gin’s famed Pork Pit restaurant.

But when the funeral for a slain security guard at his bank turns into a showdown with some nasty underworld giants, Finn knows that he must act in order to protect an innocent family.

Finnegan Lane might be the most unwanted man in Ashland these days, but he’s determined to try to make amends for his past mistakes...

Finn is my favorite male character in the Elemental Assassin series. We did have that novella point of view from Owen which was nice, but Finn is still top dog.

On a normal basis, we would Finn either stuffing his face with BBQ or backing up Gin with his sharp shooting skills. After Bitter Bite (and I’m going to try and be as unspoilery as possible), Finn is not his normal self. He finds himself in a completely different element. He’s not the same guy we normally see. He needs to find a way to redeem himself.

Finn is so much like Gin in jumping in to save people. In this case he may feel obligated, but Finn is the type of person you know he would have done this anyway. He also feels that the best way for him to lift a little of his guilt is to do this on his own. He wants to take care of this without backup.

I thought I was going to crumble with Finn feeling this way! The guy I depend on for laughs and sarcasm was lost, even to Gin and Bria. However, as he works through his feelings, you gain a lot of respect for him too. I felt like he wasn’t just Gin’s brother. He was Finn. A guy that can take the lead and get the job done. I was left feeling like this was my favorite Finn, growing into a different character for me. I think that I’m going to see him differently in Unraveled.

I was lucky enough to sneak in a few questions with Jennifer. Let’s see what she has to say!

I hope that everyone has as much fun reading Finn’s story as I did writing it.

Jennifer has a giveaway for 5 copies of BITTER BITE (5 winners!) and a $25 Amazon gift card! Open to US residents only. One winner per household. Contest ends July 25th at midnight EST.

Rafflecopter code is below: