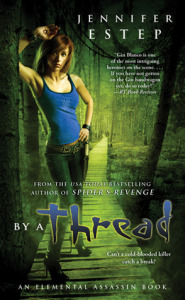 I never thought I'd need a vacation from being an assassin.

My name is Gin Blanco, and I'm the assassin the Spider. All the Ashland's lowlifes are gunning for me and trying to make a name for themselves by taking out the Spider. So I think it's a good idea to get out of Ashland for a while until things cool down.

So I'm headed south to a swanky beach town, along with my baby sister, Bria, for a weekend of fun in the sun. But when an old friend of Bria's is threatened by a powerful vampire with deadly elemental magic, it looks like I'll have to dig my silverstone knives out of my suitcase after all. But this time, not even my own Ice and Stone power may be enough to save me from coming home in a pine box.

This sixth installment of the Elemental Assassin series gets 4 out of 5 stars from me.  I have not always been the biggest fan of the Spider.  At first, Gin’s character just didn’t click with me.  She is kick ass but she seemed very cold.  I know, I know, cold probably comes from losing all your family and becoming an assassin, but I needed to see a little more to her.  Now her relationships have come to a point where she shows a lot of caring and loyalty toward her friends and family.  I’ve warmed up to her now and understand her better.

After the incredible Spider’s Revenge, Gin needs a break.  She has had the biggest fight of her life and the fallout from her revenge is getting old.  Finn has the great idea of a vacation for him, Bria, Gin and Owen.  Bria gets to reunite with her best friend and Gin gets some sun and relaxation.  Well, that was the intention anyway.  They probably would have had better luck if they just went somewhere no one knew any of them!  The foursome walk right into the middle of a problem Bria’s bff, Callie is having.  A problem headed by a very powerful vampire.  Gin and crew need to stop him before he ends the conflict between him and Callie the deadly way.

There were a few scenes that just made me want to slap some sense into Gin.  I felt that she kind of rushed into a some things, ignoring her instincts, over-confident and ending up in deadly situations.  I love how she handled one of the situations though.  It was awesome!  Did I get you curious?  I don’t want to post a spoiler so I will let you guess!

Ah, and we must discuss the reappearance of Donovan.  I will just say here, I never liked the guy.  I hated that Gin wanted him so badly and was so hurt by him.  He’s an ass.  I’m pretty satisfied with how it ends with him.  Love Owen.  Nothing at all like Donovan, thank God.

All in all, I really liked this book.  It had lots of action and even a bit of romance.  I don’t think enough romance to actually call this book a Paranormal Romance, but enough to satisfy me.  Gin shows a little more growth, so you know she is learning from her experiences.  I did say “little” right?  I think some parts showed some impulsiveness on her side that still could be worked on.

Have you read it yet?  Let me know your thoughts, leave me a comment or drop me an email.