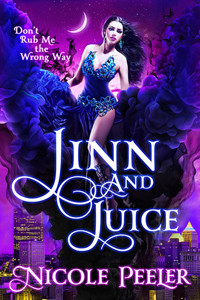 Cursed to be a jinni for a thousand years, Leila nears the end of her servitude—only to be bound once again against her will. Will she risk all to be human?

Born in ancient Persia, Leila turned to her house Jinni, Kouros, for help escaping an arranged marriage. Kouros did make it impossible for her to marry—by cursing Leila to live a thousand years as a Jinni herself.

If she can remain unBound, Leila's curse will soon be over. But Ozan Sawyer, a Magi with the ability to See, Call, and Bind jinn has other plans.
Oz needs Leila to help him penetrate Pittsburgh's steel-soaked magic, a juice potent but poisonous to supernatural creatures, in order to find a missing girl with her own mysterious connection to Kouros. Unfortunately for Leila, becoming Bound to Oz may risk more than just her chance to be human once more—it could risk her very soul...

This is my first Nicole Peeler book, which surprises me since I have some of her Jane True on my shelf. This booked peaked my interest as I hadn’t read of lot of jinni books. Actually, I don’t think I’ve read any.

I am used to jumping into different worlds, but I really felt like I couldn’t grasp this one very well. What each character’s powers were, or even what they were sort of alluded me. I did like Leila’s character. She was a loyal friend and would do anything for them, and them for her. She’s in a race against time and Oz really puts her in a bad spot. But he surprises her and he may not be so bad after all. He does have major hang ups about being Leila’s master, which was just a little bit too good guy for me by the end.

Everything takes a wrong turn near the end, and everything they thought they needed to do, went out the window and new plans needed to be formed. That was something that kept you on your toes. You thought you knew the motives behind the bad characters, only to find out they were not what you expected. I felt like, if they had any luck, it was bad luck!

I found Jinn and Juice a little slow. There were few parts of action until near the end, that were over pretty quickly and didn’t do much except burn up Leila’s energy and knock her down for a day or two. She only had a week, and I think most of it flew by with her recovering from drawing energy. I felt like sometimes things Oz said actually could be considered commands, but the jinni didn’t recognize them as commands. There were also times that Oz was told to make commands that he had no idea what they were. Like he was told to just tell Leila to “do it”. He had no idea what “do it” meant so how could it be a hard command. It was like the command thing was just whenever it was convenient to the story.

I’m not sure if this is supposed to be the beginning of the series, but with the way it ended, I’m guessing it is. The end was a cruel twist of emotions that left me disappointed.

Overall, I liked the story, there were just odds and ends that I kept picking up on instead of getting pulled into the book. 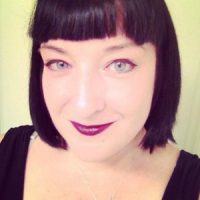 Nicole D. Peeler writes urban fantasy for Orbit Books and, in her spare time, is an associate professor at Seton Hill University, where she co-directs their MFA in Writing Popular Fiction. Having recently finished the final book of her award-winning Jane True series, she is looking forward to the upcoming publication of Jinn and Juice, the first book in a series about a cursed jinni living in Pittsburgh. Nicole also lives in Pittsburgh, although she’s neither cursed nor a jinni.

She’s also a proud member of the League of Reluctant Adults and an alumna of both Boston University and The University of Edinburgh.