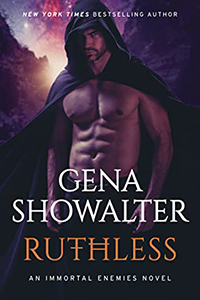 Micah the Unwilling, fae King of the Forgotten, can tame even the most violent of beasts. Forged on the battlefield, this iron-willed warrior considers his soldiers his family, and he will stop at nothing to reclaim their dispossessed land. Gearing for war with a sadistic enemy, he is disciplined and focused—until a feral beauty he encountered long ago wanders into his camp.

Viori de Aoibheall wields a terrifying ability to sing monsters to life. Having spent her childhood in a forest, raising herself and her frightening creations—the only friends she’s ever known—she’s ill prepared for the scarred royal and his fearsome brutality. Not to mention the ferocity of their connection and the carnality of his touch. But the real problem? Her brother is Micah’s greatest foe. And though the sensual king makes her burn, she must stop him, whatever the cost.

In this second installment of the Immortal Enemies series by Gena Showalter, we find out what happened to Kaysar’s sister. He had hidden her away before he was taken by the Winter Court, so Viori was left hidden waiting him for a long time before she finally ventured out to begin her journey. She finds she has some pretty interesting abilities beyond her siren voice.

Micah The Unwilling stumbles upon a girl covered in vines, asleep. She is protected by what appears to be sentient trees. Micah is entranced by Viori and tries to win over her protectors. However, when she wakes she is terrified and lets out a scream that activates her protectors and they drive him out. This is the beginning of his hatred for these strong, strange creatures and he devotes his life to killing them. Micah becomes the King of the Forgotten and is currently on a cease fire with Kaysar & Cookie that is soon coming to an end.

When Viori shows up in Micah’s camp, he is enthralled with her. But little by little Viori’s secrets come out and each one damages the relationship more and more. However, Viori has found that she has fallen for Micah and tries to figure out a way they can make it work.

I felt that Viori was pretty immature. She might have been a fun, kick-ass heroine, but I found her more selfish and childish. Micah truly had my heart. He was definitely a tortured soul and Viori’s never ending stream of revelations cut him down farther and farther, breaking my heart.

Also, I loved Kaysar’s & Cookie’s involvement. Cookie is awesome and so far my favorite female character in the series. The couple provide help for Micah and Viori when their seer suggests it and it will take all of them to defeat the attack by a trusted person in Micah’s camp. When their betrayal finally finds them, the fight is epic.

Ruthless was a fun ride and brought great, new characters into world that I had so much fun in in Heartless! It didn’t feel like same dark world that was in Heartless, but enough to make you revel in it!