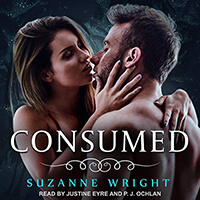 Sventé vampire Ava Sanchez has a difficult decision to make: should she accept the invitation of the Grand High Master Vampires and join their legion? It will mean leaving behind her brother and her home. It will also mean working with Pagori vampire, Salem McCauley. Unlike the majority of vampirekind, she doesn’t fear Mr. Tall, Blond, and Dauntless…even if he does have some psychopathic traits. In fact, he has a raw sexuality that tempts her to drop her ‘no relationships’ rule and give him exactly what he wants from her – everything.

Salem McCauley doesn’t like anything cute, or sweet, or cheery. Yet he wants Ava with a desperation that’s bordering on obsession. And shockingly, she doesn’t look at him like others do – you know, like they fear he’ll rip out their spinal cord for fun. Now that the legion will be busy hunting the players involved in the creation of an illegal vampiric brothel, there’s no time for pursuing Ava. But Salem makes time, because he never denies himself what he wants and he always holds tight to what’s his. And that’s exactly what Ava is, whether she knows it or not: His.

Consumed by Suzanne Wright is the first of the Deep In Your Veins series that features members of the Legion as main characters. In this installment, we follow Ava and Salem.

I absolutely adore Ava. She is bubbly, excited, and such a smart ass. Ava loves to tease Salem with her pats on his chest like she’s placating a child. She makes even talk of violence and revenge sound fun and exciting. Ava’s dialogue and attitude brought this story a lighter side to the darkness that the Legion faces. Did I mention I loved this character?

Salem is a tough member of the High Grand Pair’s squad and is an unlikely partner for Ava. However, his attachment to her is undeniable. She entertains and amuses him like no one ever has. When Salem’s past comes to the Hollow he worries that Ava is going to get caught in the chaos that is bound to be created. But Ava surprises him with her ability to take on those that would try to destroy their relationship as well as her belief in him. She is there to stand up for him.

Consumed does have a pretty fast relationship pairing, but it also contains a lot of action and adventure. The squads are working together on a case and of course you get the usual protectiveness between the couples that are happening between the two squads.

I was a little disappointed that one couple comes together without any story. I thought their story would have been a fun one too. We still see a lot of Sam and Jarod which is always a lot of fun. The combination of the great characters along with the crime solving and action made this a wonderful listen for me. The narration was great too. Both Ava and Sam are British, but Justine Eyre does a great job distinguishing the two.

Consumed was a lot of fun and a great addition to the Deep In Your Veins series. I can’t wait for more!