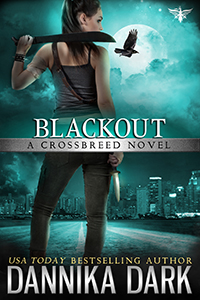 It’s a race against time to save lives in this explosive installment of the Crossbreed series.

I thought I would give myself a few days to calm down before I wrote this review. I’m still a little sore about the ending but I thought I could at least talk about the rest of the story.

Originally the Keystone crew is working a case involving deaths of some higher authority members, but when the city is suddenly claimed by a blackout, the job turns into one of protecting those remaining higher authority. The problem is protecting them from the craziness going on due to the blackout, as well as the murderer who seems to have it out for some members.

Blackout also has us dealing with Shepherd’s indecisions as well as the relationship dilemma with Raven and Christian. You really get intense feelings for Shepherd as he deals with his conflicts. He has very few roads open to him and each one has painful consequences. Gem also has a tragedy she must deal with. It feels like everyone in Keystone has some personal demons they must defeat.

I love Raven and her independence. She knows she must follow Keystone’s rules, but she also has a mind of her own. Raven will act when she needs to when she feels she is right. Granted, not all of her theories are correct, nor her actions, but her heart is in the right place. She is fighting for what she feels is right and that is respectable. I absolutely loved her interactions with Christian. Their banter back and forth brought a lot of laughs. You would believe that they hold nothing back. The big snag in this relationship is that damn creator of hers. Houdini makes me want to scream with his smart ass attitude. He acts like he controls everything going on around him, especially how Raven’s life goes. He frustrates me to no end! Sure enough, he sneaks himself in there to cause just enough chaos to stick his nose in Raven and Christian’s relationship.

The action and adventure in Blackout was so much fun. It’s a race against time and following Raven as she follows leads and fights when she needs to gets the heart pumping. She is just an awesome all around character. The relationships within Keystone also are cause for some laughs. They claim to not be the closest of people, but their actions and banter say otherwise. They are great together and just cause a lot of laughs. I love Wyatt and his reactions to dead bodies!

So needless to say, all around, I thought Blackout was an amazing installment to the Crossbreed series. Until we get to the end. I hate cliffhangers, and I feel like this what we are left with here. Despite my outrage at the actions of Raven and Christian, the little wrinkle that pops up at the end had me scratching my head and wondering how much worse things are going to get. I sure hope the next book is on it’s way out because I’m going to go insane until I see some things settled here. I’m still peeved at how this ended and I finished a couple of days ago. This is going to stick with me for sure. My emotions are riding high!

I can’t say enough how much the audio impresses me. I can’t imagine reading this series without Nicole Poole narrating. Poole brings out the personalities in all the characters that just has this series alive for me. I definitely recommend the audio for anyone wanting to start this series. However, I do want to own the paperbacks just because I love the covers. One of these days I’ll catch a good sale or get a great gift card and will snatch them up!