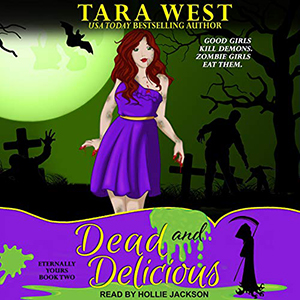 Two zombies and one skeleton on a road trip to Vegas to kill a witch, stop an apocalypse, and rescue their friends from the belly of a shadow dragon.

Nothing weird about that.

Five things I learned while being a fallen angel zombie:
1. Duct tape works better than embalming.
2. Alopecia is not my favorite hairstyle.
3. Fried demons smell like bacon.
4. This brain breath is affecting my love life.
5. Nothing ruins a honeymoon like an apocalypse.


This post contains affiliate links you can use to purchase the book. If you buy the book using that link, I will receive a small commission from the sale that goes towards keeping the blog running.

Dead and Delicious was a fun conclusion to the Eternally Yours series. Ash and Aedan get their honeymoon plans interrupted when an emergency call goes out. They get dropped into the middle of the Apocalypse. With zombies, dragons and a crazy witch who not only wants to rule the world, but get revenge on Ash for a failed sacrifice earlier in the series.

Our hero and heroine find themselves literally falling apart and craving blood while on a race to track down the crazy witch. With Ash and Aedan, all that can’t come with some hilarious moments. But Dead and Delicious is not all fun and games. We get lots of action as the witch amps up her spell. They need to deal with the dragons as well because they have swallowed up their friends. The only safe place is the churches that are guarded by archangels.

New feelings and wants come up in Ash. We see a nurturing and motherly side of Ash and I loved seeing where that led.

The battle with the witch was epic. That witch has really grown in powers since she was in hell. If she can’t take down the world, she’s determined to take Ash down to hell with her. The decision Aedan is left with is very dangerous, but the situation has Ash in a position that had me roaring with laughter. I feel like for every tough part of the story, we get handed a little comedy. That makes this series so much fun. If you want some action with a comedic lightness, this is definitely a series you’re going to want to try out!

I do recommend the audio as Hollie Jackson can really capture the urgency as well as the sarcasm in our characters. She really does a great job with the different types and ages of characters she’s dealing with. 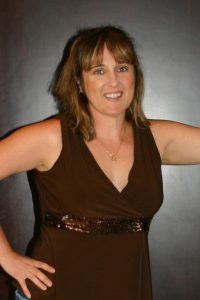 Tara West’s young adult and new adult romances have been Kindle bestsellers. A former high school English teacher, Tara is now a full-time writer and graphic artist. She enjoys spending time with her family, interacting with her fans, and fishing the Texas coast.