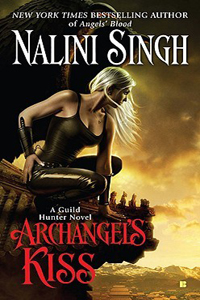 Vampire hunter Elena Deveraux wakes from a year-long coma to find herself changed—an angel with wings the colors of midnight and dawn—but her fragile body needs time to heal before she can take flight. Her lover, the stunningly dangerous archangel, Raphael, is used to being in control—especially when it comes to the woman he considers his own. But Elena has never done well with authority.

They've barely begun to understand each other when Raphael receives an invitation to a ball from the archangel, Lijuan. To refuse would be a sign of fatal weakness, so Raphael must ready Elena for the flight to Beijing—and to the nightmare that awaits them there. Ancient and without conscience, Lijuan holds a power that lies with the dead. And she has organized the most perfect and most vicious of welcomes for Elena.

I’m definitely digging in here. Elena has gone from being so powerful and strong, to just a fledgling. She has the type of spirit, though, that won’t let her be fragile for long. She’s a fighter and will put in the time to become stronger as fast as she can. It kills her to be thought of as weak.

This Archangel Lijuan sounds dangerous. Why is she so interested in Elena? Raphael did not listen to Lijuan’s advice about Elena, but I can’t see that being a reason to focus on her. Going all out and having a ball celebrating Elena? That is just suspicious.

I love meeting all of the side characters. Illiam especially. I love me some Blue Bell! Galen is also helpful to Elena in her quest to get in shape for this ball. The Refuge also sounds like an interesting place. I love imagining the little angels. In my head the Refuge just seems like some fairy tale city.

Lijuan makes the visit all seem normal, until she introduces her new creations. She also has a huge surprise from Elena’s past that Lijuan thought would get into her head and make her vulnerable. At the end, everything just went crazy. I was listening in my car trying to figure out who was where and what was happening. It was a flurry of action that had my ears straining.

The relationship between Raphael and Elena grows pretty rapidly. Their love for one another just seems to be there. Like they both knew how each other felt all along. They do have their conflicts, but I basically felt like their relationship was an already well established one. I feel a bit better about Raphael in this book. I think Elena is breaking through some of the ice so he doesn’t seem like such an unfeeling ass.

I’m definitely glad I got over my “first book in a series” problem and continued on. I can’t wait to see how the Archangels all play together and learn more about the Seven. The Seven sound very interesting. I am curious to see how each feels about Elena. We already know Dmitri’s feelings!

The audio is amazing for Archangel’s Kiss. I’m falling right into the world with Justine Eyre’s narration of this book. I love her Illiam voice! It’s so hard to get voices set for all these characters who are so old and are from so many different places. Ms. Eyre does it wonderfully.