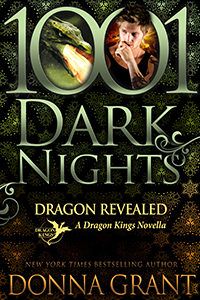 The capture of a Dragon King is cause for celebration. Jeyra never dreamed she would actually face one of the creatures who destroyed her home. But the longer she’s around him, the more she finds herself gravitating to him. All it takes is one reckless kiss that unleashes desires and the truth that has been hidden from her to set them both on a course that could be the end of them.

Varek, King of Lichens, has known nothing but a life with magic. Until he finds himself on a different realm unable to call up his powers. Worse, he’s in shackles with no memory of how it happened. When he sees an enthralling woman who leaves him speechless, he believes he can charm her to free him. The more she rebuffs him, the more he craves her, igniting a dangerous passion between them. Can he protect the woman he’s fallen for while uncovering the truth – or will peril that neither see coming tear them apart?

Dragon Revealed is our jump off from Dark Kings into Donna Grant’s new series Dragon Kings. I was so excited that we were taking a Dragon King and putting him out on a different realm. Having the whole world setup for us yet keeping that connection by bringing Varek, the Lichen Dragon King, into the story made for a great transition into the new series.

Jeyra is a great warrior who has been lied to all her life. She goes against the rules to catch herself a Dragon King who she believes killed her whole family. However, now that she has her Dragon King, the council decides to have her question the King. During the days that follow, Jeyra slowly comes to many revelations about herself, and her whole life while she comes to trust this person she feared and hated.

Dragon Revealed has many series starters. Little tidbits that give us a look into what the new series will be based on. I loved Dragon Revealed. The love story, the world and all that is to come. Bring on the Dragon Kings!